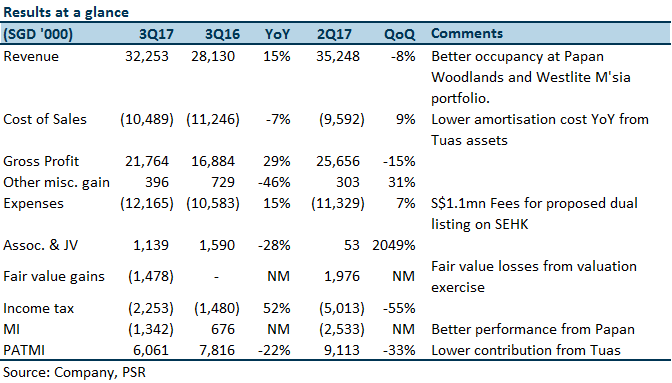 + Singapore workers’ accommodation business continue to experience high occupancy and above average bed rates. The YoY revenue growth was due to continued high occupancy of 99% at ASPRI-Westlite Papan (99% in 2Q17 and 89% in 1Q17). 100% occupancy at Westlite Woodlands. And 95% occupancy at Westlite Toh Guan and Westlite Mandai. The unutilised 5% capacity amounting to 705 beds in Toh Guan and Mandai can be used to absorb some of the displaced workers from Westlite Tuas. We estimate that the bed rates at all the Westlite dormitories are commanding a 10% to 14% premium to market rates.

+ Improving occupancy at Westlite Malaysia. Occupancy rate at the Malaysian Westlite portfolio has improved to c.86% from c.82% in 2Q17 (c.74% in 1Q17). This is due to ongoing legal enforcement on illegal worker dormitories that shifted more foreign workers into purpose-built accommodation and increased worker limit in certain sectors. We can expect positive rental reversion in 2018 as policy continues to be favourable.

+ Cash injection of S$29mn from exercise of warrants reduced net debt to equity from 140% in 2Q17 to 125% in 3Q17. The cash injection included the management and majority owners; Mr Loh, Mr Han and Mr Teo. They have exercised their warrants and increased their investments into Centurion Corporation Limited.

We expect the revenues in FY18e to be lower than FY17e owing to the absence of contribution by Westlite Tuas. While the AEP to RMIT and dwell Adelaide will only be completed by 4Q18  therefore we do not expect the projects to be accretive in FY18. However, we expect FY18 total profits to be higher because of a 30% interest in a joint venture to acquire 6 US student accommodation assets which are in operation. The acquisition will be completed in 4Q17 and are expected to be accretive by 4Q17

Our financials forecast has not included the SEHK IPO proceeds due to insufficient details. Excluding the IPO proceeds and taking into account the cash injection from the exercise of warrants, we revise our FY17e net debt to equity to 133% from previous estimate of 171%. The SEHK listing which was expected to happen in October 2017 was pushed back to a later date closer to the end of 2017.

Maintain Accumulate rating with unchanged target price of S$0.59 based on DCF model.

We still like Centurion Corporations because of the improving occupancy and possible upward rental reversions for the Malaysia Westlite portfolio in FY18; and stronger operating cash flow in FY19 as dwell Adelaide and the AEP for RMIT village will commence operations. However, on the cost side, we revise our FY17e cost ratio less interest expense to an average of 50% from previous 47% because of professional fees incurred for the preparation of dual listing in SEHK in 2H17.