+ Serviced Residences RevPAU grew 5% YoY, continuing the momentum from 4Q17. Despite the weak RevPAU performance from Ascott REIT, overall Group RevPAU grew 5%, led by strong performances in Europe, Singapore and China. China (40%) and SE Asia/Australia (30%) are the biggest markets for the Group by property value.

With >80% of CAPL’s assets being investment properties (predominantly in Singapore and China) contributing to recurring income, CAPL’s earnings outlook remain stable.  Residential sales worth RMB10.6bn in China and S$343mn in Vietnam are expected to be completed and handed over in the next 9 months, which will provide further support to earnings in FY18. Retail sales in CAPL’s Tier 1 and 2 malls are stabilising around mid-single digits growth and we expect the three new Raffles City integrated developments in China which opened in FY17 to boost recurring income growth in FY18 as occupancy improves. We estimate annualised operating PATMI for the recurring income segment alone to be c.S$740mn, sufficient to cover c.1.5x FY17’s dividend of 12c/share.

Maintain Accumulate with an unchanged TP of S$4.19.

We maintain our Accumulate rating with an unchanged target price. Our Target price translates to a P/NAV ratio of 0.93. 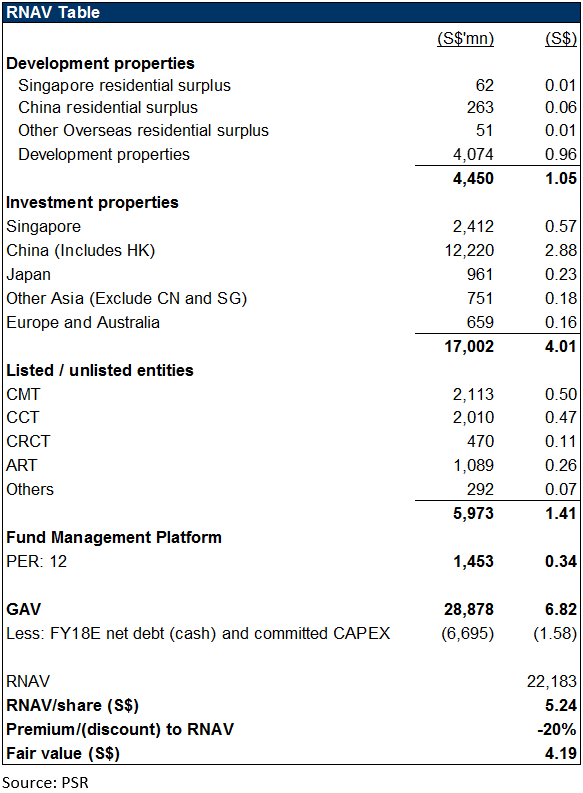