While sales volume in 1Q17 represented a 38.9% YoY decline to 2,062 units, we noted that CAPL has launched 1,811 units in the quarter. Although sales volume registered a YoY decline, sales value was down 16.2% which was significantly lower as a result of higher ASPs from fewer sales of township units which command lower ASPs. We opine that the Group may have been able to record a higher sales volume but was constrained from lesser units available for sale during the quarter. While the Group has another c.80% (6,974) of units slated to be launched in CY17, we view that the Group’s sales volume is unlikely to accelerate as the Chinese Government maintains a tighter grip on the property market, in order to curb the rapid gains in home prices in the past year, while maintaining stability in the property market.

In 1Q17, the four operating Raffles City (RC) integrated developments (Shanghai, Beijing, Changning and Ningbo) saw a 3% YoY growth in NPI to RMB272 million (RMB116 million attributable to CAPL). These assets continue to operate at close to full average occupancy rates (retail: 98% and office: 88%). We are of the view that NPI will grow significantly in FY18 as three other retail components (Hangzhou, Changning and Shenzhen) of RC assets become operational in 2Q17, while taking into account of the time required for these assets to stabilise. The three new RC assets’ retail component will boost total NLA of the Group’s existing China RC portfolio by 55.9%. Additionally, the pre-committed leasing rates of these three assets are at least 95% as at 1Q17.

We are upbeat about the four new retail assets which are slated to be operational in 2Q17 as these assets will be boost CAPL’s recurring income moving forward. A higher recurring income base is much welcomed in China against the backdrop of Chinese Government’s commitment to curb rapid increases in property prices and maintain stability in the market. We maintain an “Accumulate” rating with an unchanged TP of S$4.19.

Retail – Same-mall NPI growth in China up 7.6% Flat in Singapore. One new shopping mall to be opened in China in 2Q17.

CAPL’s same-mall NPI growth in China grew 7.6% YoY to RMB1 billion, mainly driven by a 17.9% YoY NPI yield improvement in malls in Tier 2 cities. We opine the continued strong performance in the Group’s China malls was largely attributable to higher tenant sales where it grew 12.6% YoY in 1Q17 (FY16 YoY growth: 10.2%). This trend is likely to continue as the Chinese Government remains committed to shift the nation’s economy towards a model of consumer spending while being less reliant on exports and investments. The Group intends to open a new shopping mall, CapitaMall Westgate, in Wuhan in 2Q17 which will add 0.25 million sqm of GFA. In Singapore, we expect rental reversions to continue to face pressure due to peak rents signed in 2004/2005 period due for renewal.

In Singapore, CAPL sold 83 residential units worth S$497mn in 1Q17. Total units sold was down 63% y-o-y but total sales value kept up with the S$506mn sold in 1Q16. This was due to the higher average selling price achieved in the quarter through the bulk sale of 45 units in The Nassim. We expect contribution from residential sales in Singapore to come off significantly in the coming quarters due to dwindling inventory as most projects are >90% sold with the exceptions of Sky Habitat (78%), Marine Blue (52%), and Victoria Park Villas (19%).

We maintain our view that Victoria Park Villas remain the primary concern for ABSD charges (S$46mn by June 2018) despite improving buying sentiment on the ground as seen from recent strong launches in the quarter for projects such as Seaside Residences and Park Place Residences. This is due to the large selling price quantum for each unit (>S$4mn) and the restrictions against foreigners for landed home projects. CAPL moved 2 units in the quarter (88 remain unsold). Average selling price was S$1990psf. We feel that price cuts are likely as we move closer to the ABSD due date. Total inventory left for CAPL’s Singapore residential property stands at S$1.3bn (3% of total CAPL assets). This is down from S$1.7bn at end FY16 and S$1.9bn at 3Q16.

Weakness in the Raffles City Singapore portfolio (NPI down 5.3% y-o-y as a result of lower hotel turnover rent) was mitigated by higher contributions from CapitaGreen. The pace of decline in office rentals is abating (-1.6% y-o-y in 1Q17 vs -4.8% in 1Q16) and we continue to expect rents to bottom out in 2018 as demand for offices improve and the record supply in 2017 gradually gets absorbed. Minimal leases (5% by monthly gross rental income in CCT portfolio) are due for expiry for the remainder of 2017 and this mitigates the downside risk for the rest of the year.

Q1 RevPAU decreased 1% led by 9% drop in Singapore. Although we expect corporate demand to improve y-o-y in 2017, we expect RevPAU pressure on the Singapore portfolio to continue due to the expected 6.6% increase in supply of hotel rooms in 2017 to c.68,587. A good portion of this new supply is in the upscale/luxury segment such as Sofitel Singapore City Centre (Tanjong Pagar Centre) and Andaz Singapore (DUO). We expect other segments in Asia and Europe to remain stable on the back on improving global economic conditions and sentiment.

Nevertheless, we expect a boost to earnings in 2017 come from the 2,600 units expected to be opened in 2017. This represents 8.6% of the total 30,386 operational units currently. Ascott also continued its capital recycling efforts with divestment of properties in Germany and Japan in the quarter. 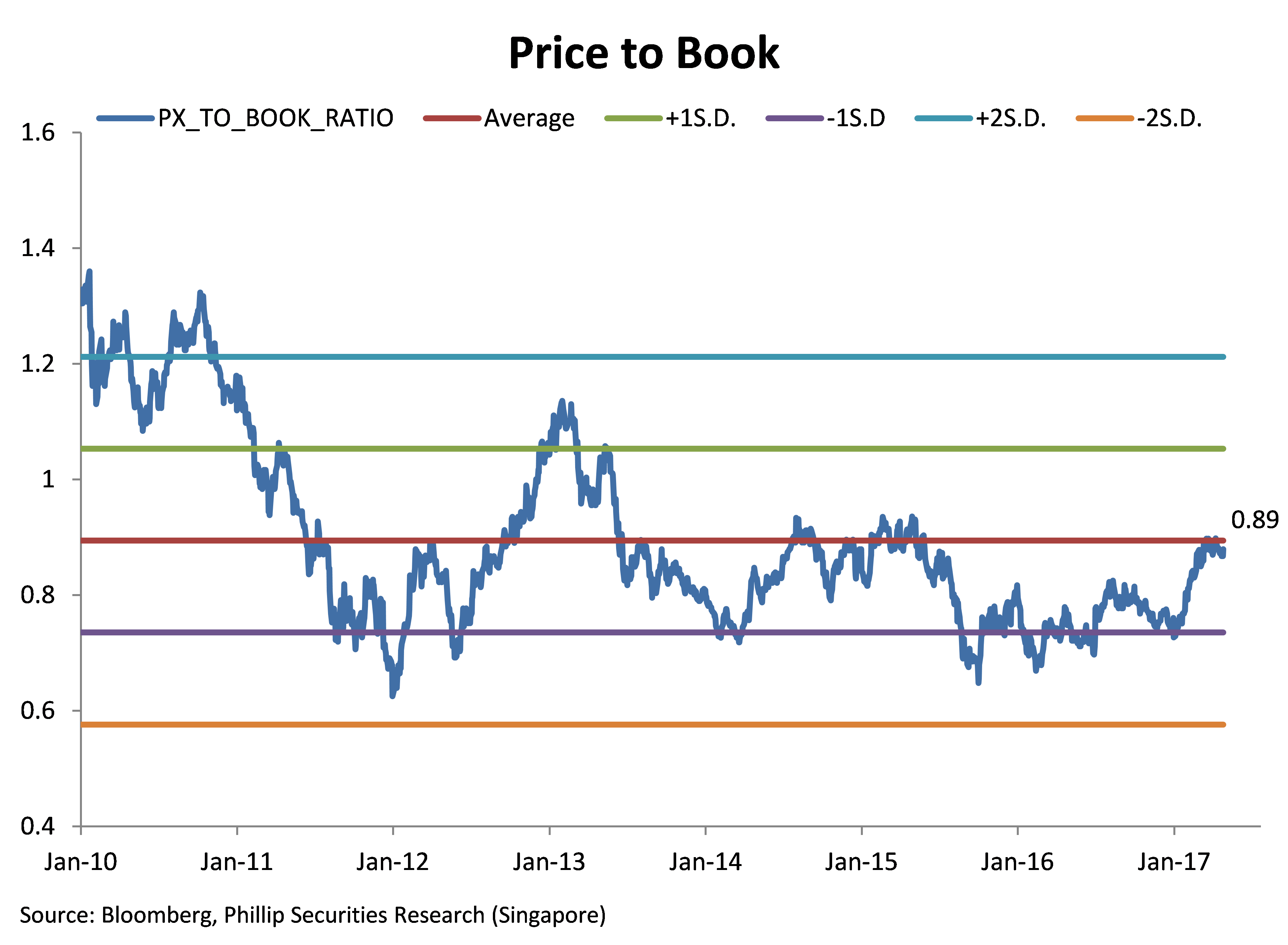