+ Minimal lease expiries left for 2018. With the 96k sq. ft. of new and renewed leases signed in 1Q18, CCT has only c.5% (by rental income, GRI) of leases left expiring in 2018. Though the Group does not reveal official rental reversion numbers, expiring rents for the quarter came in at the lower end of the range of newly committed rents. Lease renewal risks are now significantly mitigated with the minimal leases expiring for rest of 2018.

+ 2019 lease expiries will benefit from expected rising rents from now till then. We expect spot rents to continue growing over the next two years with the tapering of office supply and improving demand. We are thus less worried about the 31% of leases expiring in 2019 (by GRI) than those expiring this year.

+ Fully refinanced debt due in 2018. No more refinancing risks for the year. Management has been proactive to refinance debt expiring in 2018/2019 in view of rising interest rates. Only about c.8% of total debt expires in 2019. We note that a higher proportion of total debt (90%) is now hedged on fixed rates, vs the usual 80% over the last two FYs. Average cost of debt increased slightly to 2.7% (up 0.1% bps from FY17) as a result.

Lease renewal and interest rate refinancing risks have been largely reduced with only 5% of leases and zero debt expiring this year. DPU outlook is thus stable. There is potential earnings upside from higher occupancy at AST2, which stands at 90.8% currently. Our only major concern is the elevated gearing level at 37.9% which could prove inhibitive to future acquisitions. Nonetheless, near term growth drivers are contributions from AST2 (acquired Sept 2017) and the completion of CapitaSpring in 2021.

Upgrade to Accumulate with increased target price of S$1.88

With strengthening rents, refinancing risks much reduced until FY19 and negative rental reversions turning out less severe than we expected, we revise our FY19e DPU upwards by 3%, with a corresponding increase in target price to S$1.88. Our target price translates to FY18e yield of 4.6% and P/NAV of 1.04. 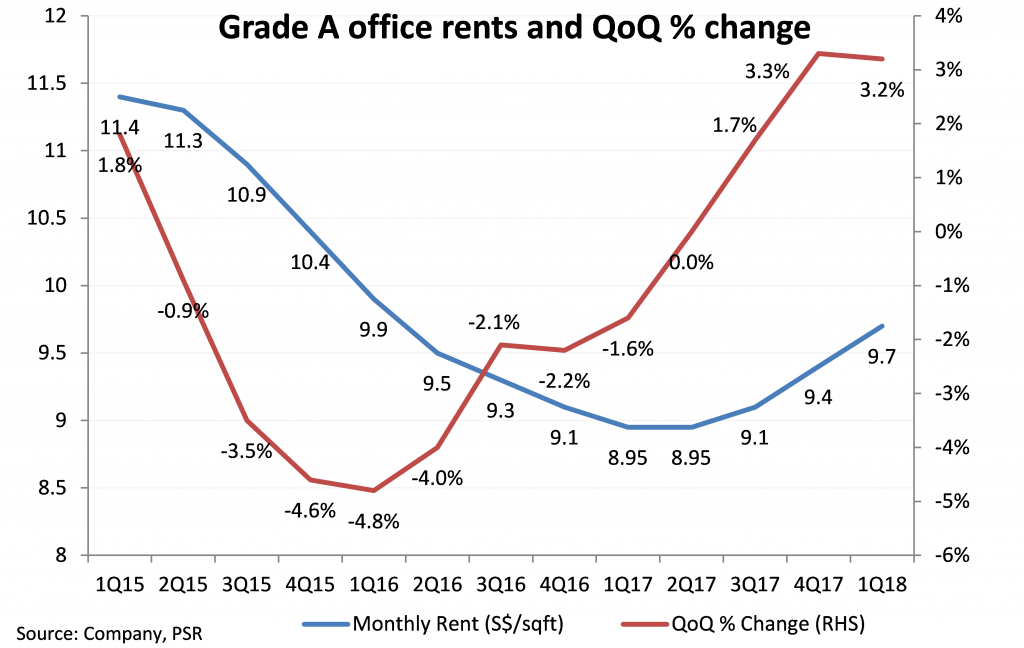