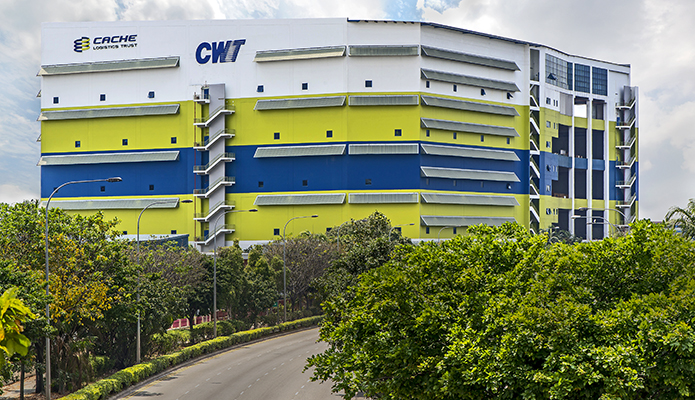 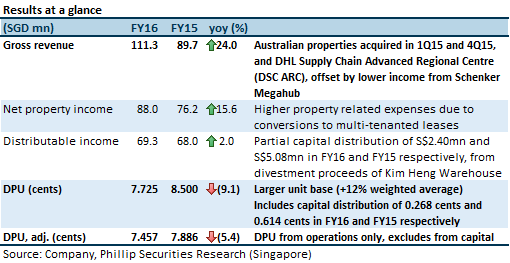 S$80.74mn fair value loss in investment properties for the full year was effectively by the Singapore portfolio. There was a S$36.1mn fair value loss in 3QFY16 in relation to 51 Alps Avenue (Schenker Megahub). The remaining S$44.6mn loss in 4QFY16 was mainly due to four properties – CWT Commodity Hub, Cache Cold Centre, Hi-Speed Logistics Hub and Pandan Logistics Hub. In contrast, the Australia portfolio appreciated a modest 1.7% year-on-year (yoy) to A$168.6mn. Overall, NAV/share is lower by 10 cents yoy to 78 cents.

The manager remains confident of its position in the tenancy dispute at 51 Alps Avenue and expects a positive outcome from the court proceedings. Divestment of Cache Changi Districentre 3 was completed on January 23, for S$25.3mn. The manager has not specified how the cash proceeds will be deployed, but we believe the immediate consideration would be to lower aggregate leverage by retiring debt, followed by making an acquisition and lastly stabilising DPU by paying out capital as distributions.

Leases expiring in FY17 not a major concern, but FY18 has concentration risk

4.9% of leases by gross revenue will be expiring in FY17; none of them are master leases. Thus they will not pose a major impact to the portfolio. However, FY18 will see 22% of leases expiring – split between CWT Commodity Hub master lease (13%) and others (9%). More than 60% of the space in Commodity Hub has been forward renewed.

Confronted with the dim prospects for inorganic growth without further unitholder dilution, and track record of yoy lower DPU from operations, we now use -1.5% as our terminal growth assumption. Our target price is an implied 0.95x FY17e P/NAV.