+ Broad-based increase in RevPAR across key geographies, led by stronger overall occupancy rate.  4Q17 RevPAR for Thailand (which accounts for close to 60% of Group revenue by our estimates) grew 19% YoY to S$234 in 4Q17. This is an acceleration from the average 11% YoY growth in 9M17, notwithstanding the fact that 4Q16 was the first quarter Thailand’s tourism suffered after the passing of the Thai King and could have provided a lower base for comparison. Strong RevPAR growth was led by an improvement in Group overall occupancy from 57% in FY16 to 63% in FY17.

+ 15% YoY improvements in hotel forward bookings for 1Q18. Reflecting an improving outlook in tandem with the improved occupancies, overall forward booking is 15% above the same period last year. This is a vast improvement from the 9%/-3% in 3Q17 and 2Q17.

– Weakness in Maldives was a drag in FY17, likely to extend into 1Q18 because of the ongoing state of emergency in the country. RevPAR dropped 5% in 4Q17, as the intense competition from the oversupply of rooms continues. On a more positive note, decline has moderated from the 9 to 33% fall in the first three quarters of the year. While weakness in Maldives is expected to continue into 1Q18, we expect conditions to stabilise thereafter with the tapering of supply of hotel rooms.

Outlook is positive as we expect RevPAR strength for the Group’s biggest market Thailand to sustain. The weak 1Q17 following the passing of the King, will be a low base comparison. We also expect the competition from oversupply of rooms in Maldives to stabilise towards 2H18 as like-for-like competing room supply tapers off in 2018. The Group has an estimated unrecognised revenue of S$50mn, which will be recognised in FY18. Further price catalysts could come from the realisation of management contract deals under the partnerships with Accor and Vanke.

We maintain our growth forecasts for FY18e as earnings is expected to be driven by sustained strength in the Group’s largest market in Thailand and less challenging conditions in Maldives in FY18. The new partnerships with Accor and Vanke offer opportunities for BTH to scale up at a much faster pace than before. Our target price translates to c.1x FY17 and FY18e P/NAV.

The Group made a tender Offer Price of THB40 in cash for each of the remaining 34.25% of total LRH shares that the Group does not own. Total cash consideration would amount to c.S$95mn. Rationale for the acquisition is to enable BTH Group to increase its economic interest in LRH and enable existing LRH shareholders the opportunity to realise their investment in LRH. The Group has no plans to delist shares of LRH from SET. 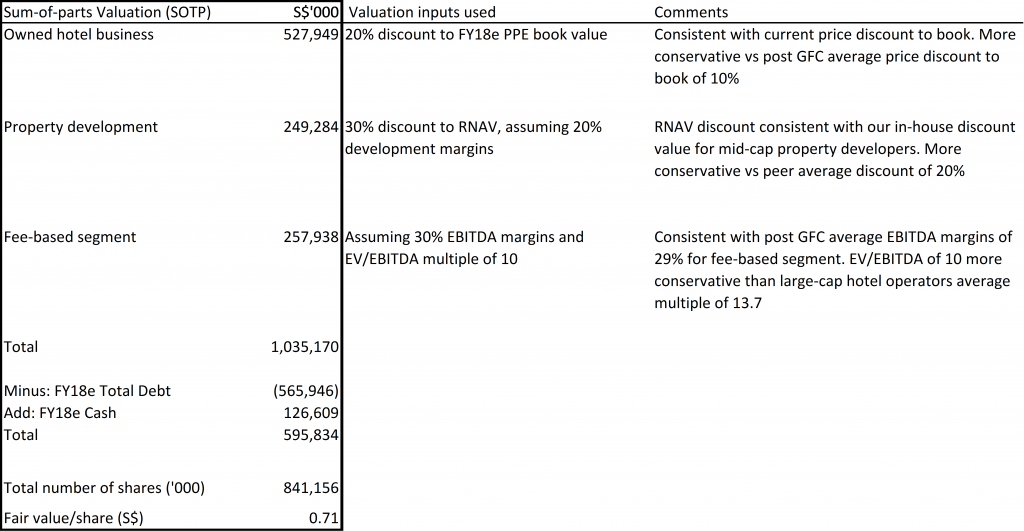