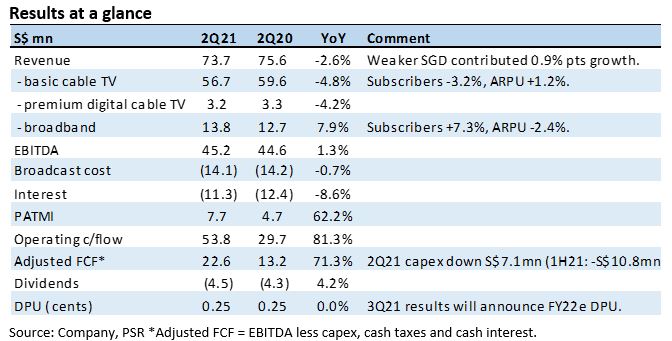 + Capex structurally lower. Capex trended at 25-30% of revenue from 2015 to 2017. 1H21 capex declined to a low of 11% of revenue. Investments in fibre have peaked and capacity is sufficient to meet current growth in broadband subscribers and future 5G data backhaul requirements.

– Cable TV still declining. Cable TV revenue fell 3% YoY to S$56.7mn The decline was evenly spread between subscriptions and non-subscriptions. Cable TV subscribers are on a secular decline due to piracy and over-the-top TV. Broadband will be key to revenue sustainability.

Current yield of 7.6% is well-covered by healthy cash flows. Catalysts are expected from 5G data backhaul, though the timing is unclear as mobile operators have been prudent on spending.