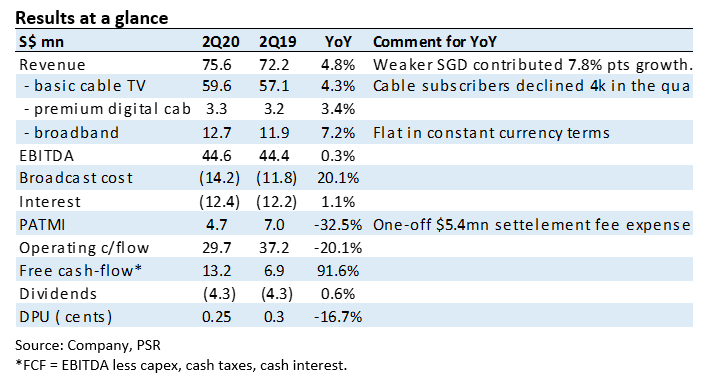 + Free-cash flows (FCF) remains healthy. FCF of $13mn this quarter more than covers the dividend payment of $4.3mn. Dividends payable will rise to S$4.5mn per quarter after the higher share base post rights issue. The higher FCFs was due to a fall in capex by around S$5mn YoY.

– One-off S$5.4mn settlement expense. There was a S$5.4mn one-time programming settlement fee paid by APTT to the content agents. It is additional programming cost after negotiations that started in 2019.

– Jump in broadcasting cost. There was an unexpected jump in broadcast and production cost. The reason was timing in accruing the cost but will stabilize on an annual basis. We are assuming programming expense was lower last year on expectations that negotiations with broadcasters for lowering cost would be successful. This did not materialize.

Cable TV remains the weak spot with subscribers contracting around 4,000 per quarter. But total subscribers for APTT, including broadband and premium digital TV, have started to rise (Figure 1). Total subscribers are rising around 2% per year but blended ARPU* is declining by 5%. We still expect total revenue to contract. We raised our EBITDA forecast by 4% due to the change in foreign exchange assumption. Other changes in our forecast were higher broadcast and programming cost, the inclusion of the settlement fee and incorporating proceeds from the rights issue.

The three reasons for our BUY recommendation are as follows: 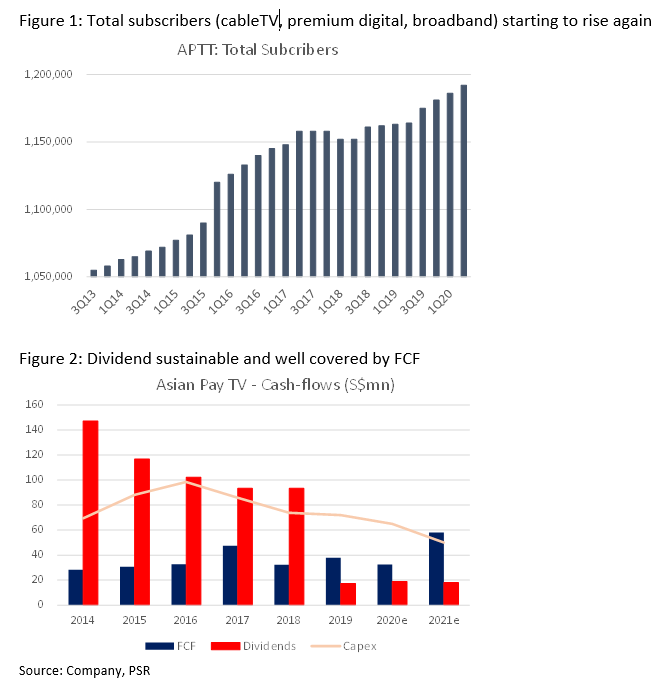