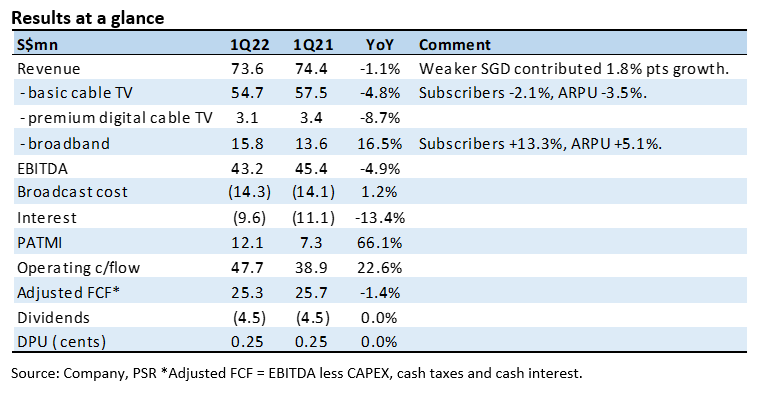 + Broadband growth from higher prices and subscribers. Broadband added 7,000 subscribers (1Q21: +5000), while ARPU rose 5% YoY to TWD373. ARPU has expanded QoQ for the fourth consecutive month. Higher speed broadband plans of 300Mbps to 1Gbps are driving the rise in ARPU. Only 40% of its cable TV subscriber use APTT broadband.

– Non-subscription cable TV revenue at a record low. Basic cable TV declined 5% YoY to S$54.7mn. The largest contraction was from the 10% drop in non-subscription revenue to S$7.5mn. Leasing channels to third parties (e.g. home shopping networks) is expected to deteriorate further as households shift their spending towards online shopping.

We believe higher interest rates will not impact the ability to sustain dividends. From the S$1.5bn debt outstanding, around S$1bn has interest rates fixed or swapped to a fixed rate of 0.89%. The more expensive S$160mn Singapore dollar offshore loans bear an interest of 2.6%. We expect S$60mn of the loan to be pared down from the current $127mn cash holdings. The remaining S$300mn unhedged offshore loans will be partially hedged. Assuming a 1% rise in interest for unhedged S$500mn loans, increment interest is S$5mn. There is sufficient buffer from S$80mn annual FCF to cover the $18mn dividend. APTT aims to lower current net debt to EBITDA of 7.4x to 5x-6x to lower borrowing costs.