We are bullish on AFL on the company’s market share in Japan, as well as its strong balance sheet and strong dividend history. The current trend for dollar/yen is in favor for AFL’s operations and should continue for a while. Japan’s demographics should lead to rising demand for medical needs and hence greater demand for medical insurance. The company has projected a 3-5% CAGR for its US operations and a 4-6% CAGR for its Japanese operations for the next 2 years until 2019. We believe that AFL makes for a solid investment on the back of its strong financials and current valuations.

AFL recently reported its earnings at the start of February. They reported an EPS of US$1.54 compared to consensus estimates of US$1.65 and down yoy from US$1.56. Revenue was strong, increasing 12% yoy to US$6.0 bn due to stronger yen/dollar exchange rates. Following the announcement of results, AFL fell about 3% post earnings but has since shown signs of recovery.

We believe that AFL is well positioned to take advantage of certain growth catalyst in the future. As an insurer, AFL generates income in two ways; policy premiums and investment income from invested premiums.

Since AFL derives about 75% of its revenue from Japan, and due to the demographics of the country, namely the aging population, we believe that the need for medical services will only increase going forward. As such, the demand for medical related insurances should also increase, and AFL, with its market share of the Japanese market, should be able to capture this growing demand to increase premium income. AFL is also trying to increase its US business, and have started leveraging its One Day Pay scheme, which promises to pay out claims within the same day as the claim, to increase customer satisfaction and increase brand awareness and account penetration.

Additionally, interest rates are expected to be raised about 3 times in 2017, and each hike is a potential catalyst for AFL to grow. AFL ended the year 2016 with US$ 116 bn in total cash and investments, a 9.9% increase yoy. AFL’s net investment income for 2016 was about US$3.3 bn. When interest rates rise, AFL will be able to generate a higher return on its investments and hence report higher earnings. 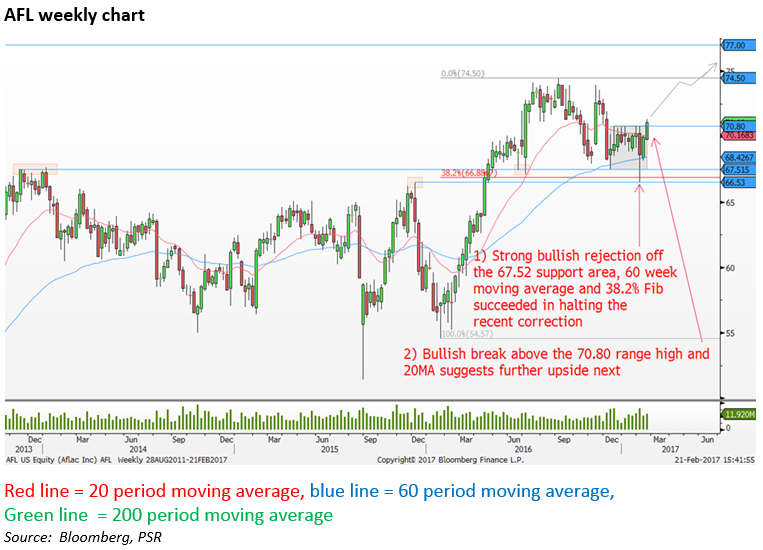