We are bullish on the stock because of the pipeline of projects. While the projects require capex, we view it positively that the company is reinvesting capital into new projects. We argue that investing in projects with a higher return than the cost of capital creates value for shareholders.

Operating expenditure (OpEx) was 2.4% lower year on year (yoy), mainly due to lower staff costs (largest cost component) and lower purchases of supplies and disposal charges (second-largest cost component). We understand from management that the yoy lower staff costs was due to lower headcount, as the group improved on productivity through the use of machines and equipment; and the yoy lower purchases of supplies and disposal charges was due to start-up costs for a project in the previous year. In view of these, we are expecting sustainable EBIT-margin in the low-teens going forward.

800 Super made an announcement on 27 October 2016, in relation to the contract from the Public Utilities Board. While the announcement stated that the contract starts from 7 November 2016, we understand from management that the project has not contributed yet. We understand that construction of the facility will only commence in 2Q CY18. Details on capital expenditure (CapEx) and the project timeline to be announced in the next quarter. However, we do expect the company to be taking on more debt to fund the construction cost of the facility. We have yet to include the contribution from this project into our forecasts. Hence, this is a source of further upside to our valuation of the stock.

We believe this will be welcomed by investors and trading liquidity of the stock may improve going forward. In view of the interim dividend, there will be a one-off higher cash out flow in FY17. We continue to assume a full year dividend based on 30% payout ratio. However, our FY17F/FY18F dividend forecast of 2.75/3.00 cents is now lower than our previous forecast, as we have adjusted our FY17F/FY18F net profit forecast lower by 9.7%/10.5%, in view of our over-estimation for 2Q FY17.

The significantly higher target price is due to change in valuation method from relative valuation to intrinsic discounted cash flow (DCF) and the rationale is explained overleaf. Our target price gives an FY17F forward P/E multiple of 15.4x, which is slightly higher than the Straits Times Index (STI) implied P/E multiple of 14.4x (Source: Bloomberg). 800 Super has consistently outperformed the benchmark index since we initiated coverage on the stock, and we believe that it will continue to do so, thus justifying the premium over the benchmark index.

We have changed our valuation method from the previous relative valuation to intrinsic discounted cash flow (DCF) model.

When we initiated coverage on the stock in September 2014, we had used 8.0x P/E multiple to value it because of the major contracts that are of 6 or 7-year tenures. Our P/E multiple used to value the stock had changed a few times during the course of our coverage and in our last report, we had pegged 800 Super’s valuation to 9.0x of its forward P/E.

We are using the free cash flow to firm (FCFF) model, primarily because of the uncertainty in debt level going forward. We are expecting the company to take on more debt for the material recovery facility (MRF) project and the sludge purification and disposal facility. 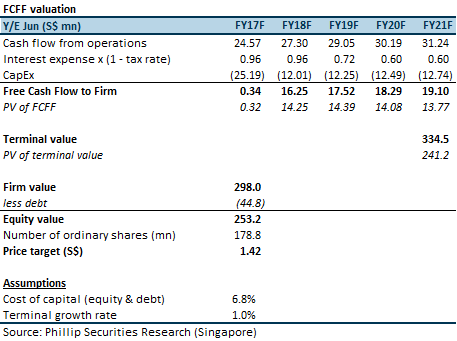