Y-o-y lower PATMI was better than our forecast of S$4.5 million (40% y-o-y lower). This was mainly due to lower than expected staff cost that was 55% of 3Q FY17 operating expenses (opex). We were expecting a larger increase in staff cost, in line with historical trend. Staff cost as a percentage of opex has been increasing over the last five years from 44% of opex in FY12 to 56% in FY16. 3Q FY17 staff cost was 9.3% y-o-y higher due to a decrease in government grant under the Wage Credit Scheme, but still 16.8% lower than we expected.

WTE plant will only contribute nearer to the end of 2017

The waste-to-energy (WTE) plant which is on track to be completed in 2Q CY2017, will supply electricity to the existing vehicle depot and future sludge treatment facility. We expect the WTE plant would only have a meaningful contribution to the Group’s financials at the end of CY2017, due to the ramp-up period.

800 Super signed a $133.65 million contract with the Public Utilities Board in October 2016 for the treatment and disposal of sludge from water reclamation plants for a period of 15.5 years. 800 Super has commenced the development of the sludge treatment facility at Tuas South, adjacent to the soon-to-be-completed WTE plant. The capital expenditure budget for the facility is $53 million and will be funded by internal resources and debt. This sludge treatment project replaces the material recovery facility (MRF) that was announced previously and is expected to be completed in 2Q CY2018. We understand that the existing MRF at Woodlands has capacity to support existing needs.

We have forecasted the project to be 40% funded by new debt (~$21 million), in line with the Group’s FY16 debt-to-equity ratio of 0.65x. We have assumed revenue contribution from 1Q FY19 onwards, ramping it up to steady-state over two quarters. We have lowered our FY17F and FY18F dividend payout assumptions to 2.50 cents, in anticipation of the Group retaining cash to fund the project. We have raised our terminal growth assumption to 1.5% and increased long-term capital expenditure assumption as well.

The National Environment Agency (NEA) will be calling for tender in 3Q CY2017 for the Public Waste Collection (PWC) contract for the consolidated Bedok and Pasir Ris-Tampines sectors, where SembWaste and Veolia are the respective incumbents. We understand through our channel check that there are 13 candidates who are in the pre-qualification stage now, and that six candidates were pre-qualified in the last tender. 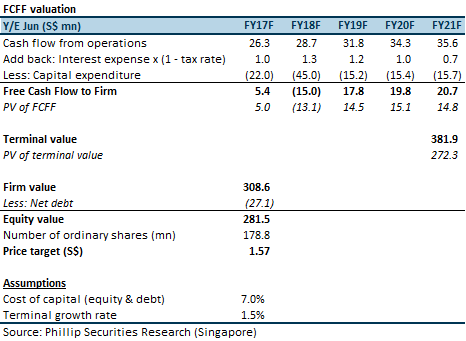 We prefer 800 Super for its superior return-on-equity (ROE) over its closest peer. At the same time, 800 Super’s last-twelve-months’ earnings grew 25%, while its peer had 8.1% earnings growth for its most recent fiscal year ended December.