Global economy continued to perform well on the strength of sustained recovery in advanced economies that coincided with a pickup in global trade and industrial activity.

In the U.S., the economy rolled on by growing 3% (2.3% Y/Y) in 3Q17, despite some areas were battered by hurricanes. Hurricane Harvey reduced oil & gas output while Hurricane Irma lessened agriculture production.

We expect a pickup in growth in 2018 underpinned by Consumer Spending as consumer and business confidence soar thanks to rising household wealth and income coupled with tightening job market (unemployment has declined to 4.1%). But, the resiliency of consumer confidence depends on the policy directions under the new Trump administration.

Similarly, Europe had turned in some better economic numbers. The economic growth has stepped up to 2.5% (Y/Y) in 3Q17 from 2.3% (Y/Y) in 2Q17. However, recovery in Euro area is more fragile in light of the uncertain future of the economic union.

In Japan, the economy extended its growth streak to seven consecutive quarters, the longest in nearly two decades. 3Q17 GDP rose 1.4% (Y/Y), slowed down from 2.6% (Y/Y). Exports have been central to Japan’s recovery, helped in part by a weak JPY. We believe that the recovery will continue but may lose some steam unless export maintains its growth momentum.

China has continued implementing structural changes in its economy by shifting activities from industry to services. Growth now relies more on domestic demand and less on exports. Moderate deceleration of growth to 6.5% (from 6.7% in 2016) is expected this year, in line with the government’s target, and further to 6.2% in 2018.

The Chinese government has appeared to put heavy emphasize on the maintenance of financial and fiscal stability at the expense of marginally lower growth.

In short, the controlled moderation of growth in China is balanced by expected healthy growth elsewhere.

Current State: In the Doldrums

We started this year with optimism that Indonesian economic growth would reach 5.0%-5.3%. However, so far real GDP growth has been disappointingly low.

After barely holding on to 5.0% (Y/Y) in the first two quarters, growth edged up to 5.06% (Y/Y) in 3Q17 on the back of higher investment, a-pick up in net export as well as rebound in government spending (Exhibit 8). 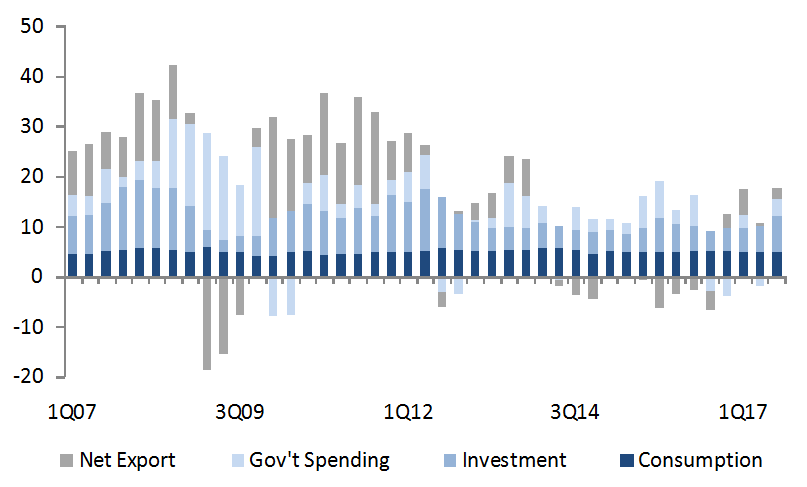 Geographically, 58.5% of economic activities took place in Java. Sumatera gave smaller contribution, 21.5% down from 21.7% (2Q17) while contribution from Kalimantan and Sulawesi was stable at 8.1% and 6.1% respectively.

Although rising steadily, the output gap remained positively small, only 0.5% of GDP and not enough to push up inflation (Exhibit 9). In fact, headline inflation fell below 4% during July – September period amidst jump in crude oil prices and slight appreciation in USD/IDR..