This article is part of the US election series brought to you by POEMS. #USelection2020 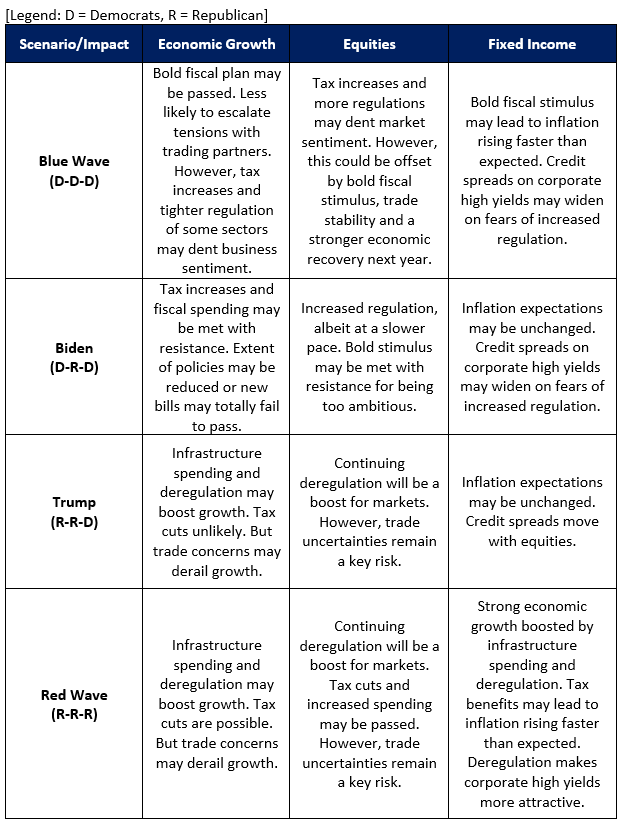 Based on current betting odds, the Democrats appear poised for a clean sweep in the upcoming Senate, House and presidential elections. The odds for a blue wave are the highest, at 35.1%. The next most probable outcome is a Trump re-election but with a united Democratic Congress. This outcome has a 24.8% chance of occurrence.

This could be due to difference in policy choices. The Republicans tended to stimulate the economy through tax cuts, which may have a lower fiscal multiplier (Figure 1). On the other hand, the Democrats preferred to stimulate consumption through infrastructure spending and redistribution policies, which may carry a higher fiscal multiplier. A higher fiscal multiplier will in turn drive higher economic growth. This can be supported where historically, U.S. annual real GDP growth under a Democratic president averaged to be around 4.26%, while annual real GDP growth under a Republican president averaged to be only around 2.31%. 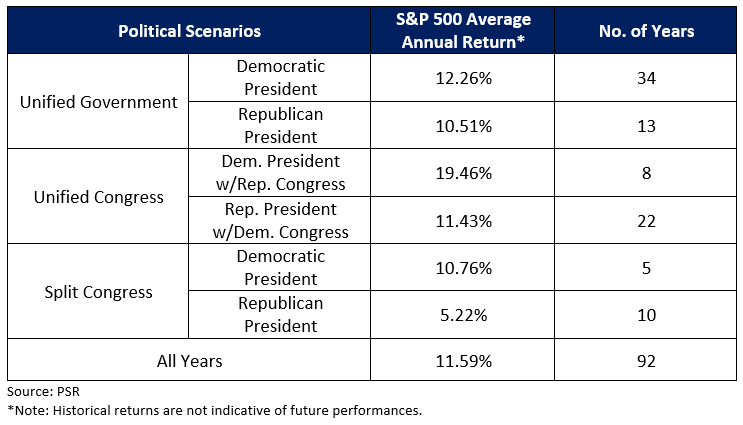 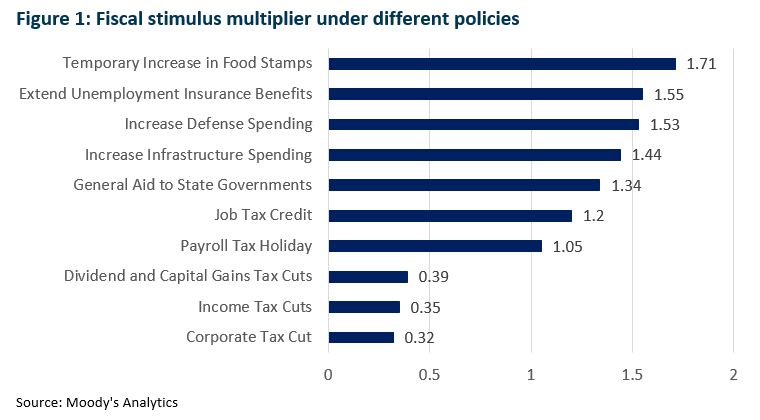 U.S. – China Relations: The President tends to set the tone for foreign policy. De-coupling with China may continue. However, the approach may be multilateral and less hostile, with the US working through the WTO and with allies to impose pressure on China. Biden aims to reinstate the TPP and “re-evaluate the tariffs upon taking office”. This suggests that tariffs may remain status quo or even be rolled back, which would be positive for international trade.

Fiscal Stimulus: Biden has proposed a US$2 trillion green-energy, jobs and infrastructure plan over four years. His bold plan is more likely to be passed with a unified Congress, which will help offset some impact from proposed tax increases. The fiscal deficit will continue to widen, regardless of who becomes President.

Regulations: Biden may seek to reverse Trump’s deregulatory actions or increase oversight in three major areas: environment, finance and the technology sector. Generally, increased regulation results in high compliance costs for companies, which hurt corporate profits. Certain regulations, such as data security, may be passed more quickly than others such as anti-competition.

Tax Policy: US corporate tax rates may be raised from 21% to 28%. Generally, tax increases dent business sentiment but the impact may be attenuated by fiscal spending. Increases may also be gradual, depending on the pace of the U.S. recovery from Covid-19. The impact of tax increases on corporate profits may thus be limited.

Monetary Policy: Monetary policy tends to be apolitical. Historically, Biden tended to respect the Fed’s autonomy. We think the Fed’s “whatever it takes” support for economic growth will continue, regardless of who becomes President.

Fiscal Stimulus: Bold spending may be met with resistance from the Senate. Biden’s proposed fiscal spending may be deemed too ambitious, leading to a reduced budget. However, fiscal measures should continue to play out to aid economic recovery. The fiscal deficit is likely to widen further, regardless of who becomes President.

Regulations: Increased regulation and oversight may face some resistance from a Republican Senate. Republicans are generally deemed more business-friendly and known to favour limited government regulation of the economy. As such, regulations may take longer to be passed or deregulation may continue.

Tax Policy: Proposed tax increases may face resistance from the Senate. Tax increases may be lower than proposed or even rejected. With lesser tax revenue, proposed fiscal spending may be affected.

U.S. – China Relations: The President sets the tone for foreign policy. A tougher stance on China may be expected, with risks of further tariffs on non-compliance. De-coupling with China may pick up speed. Trump will also likely proceed to pull out of TPP, which creates uncertainties over international trade.

Fiscal Stimulus: Trump previously signalled that infrastructure packages would focus on transportation projects and 5G wireless infrastructure. He has no intention of spending on green energy. Fiscal spending may be tilted towards an economic recovery from Covid-19. However, a split Congress may slow the fiscal rollout, as seen from the current fiscal-relief deadlock.

Regulations: Status quo. Investors expect the pro-business environment to continue under any second term for Trump.

Tax Policy: The Tax Cuts and Jobs Act is set to expire at the end of 2025. The tax bill may be extended, with the depth of tax cuts potentially compromised. Trump faced resistance to his tax-cut policy from all Democrats in 2017. Push-back is expected to continue.

Monetary Policy: Monetary policy tends to be apolitical. Trump has a history of pressurising and tampering with the autonomy of the Fed. He may call for slower interest-rate rises, which are already in line with the Fed’s dovish stance of ‘lower for longer’ rates until at least 2023. The Fed’s “whatever it takes” support for economic growth will likely continue regardless of who becomes President.

Fiscal Stimulus: With a united Congress, fiscal spending focused on an economic recovery may be passed at a faster pace. Trump previously signalled that infrastructure packages would focus on transportation projects and 5G wireless infrastructure. These are likely to be passed.

Regulation: Trump considers his long parade of deregulation as one of his greatest achievements.  Relaxed business regulation and a pro-business environment should continue. Deregulation may occur faster with a unified Congress and enforcement of current rules may be further eased.

Tax Policy: The tax bill may be extended with low risks of being compromised. Further tax cuts are possible.

What about the black swan event, if Biden won and Trump refuse to leave?