The inversion of the yield curve has been one of the most accurate early indicators of a recession. When the yield on the 10-year U.S. Treasury moved below the yield on the 3-month T-bill last Friday, it caused ripples in the equity market. Over the past nine recessions since World War 2, seven have been preceded by a yield curve inversion. Yield curve inversion does not cause a recession, but it is a very critical signalling mechanism. We believe that the U.S. economy will cool in 2019, but there are not enough warnings signs to show that a recession is imminent.

Market rallies after the first inversion. After the initial inversion of the yield curve, the equity market can still rally sharply. As per Figure 4 and 6, in the past three recessions, there an average upside move in equity markets of 28% and 32% after the inversion of the 3m10y yield spread and 2y10y yield spread respectively. The rally will last for at least 14 months before the market downturn. Therefore, we expect the positive momentum since the start of the year to continue despite the inversion.

Probability of recession has increased, but recession unlikely for this year. On average, it took 22 months after the first inversion of the 3m10y before a recession occur (Figure 5). There are at least 4 instances of the inversion of the yield curve before the actual recession. Therefore, in the worst case scenario, we expect the recession to only occur in Q1 2020.

Recession indicators are at healthy levels. Corporate credit spreads are at healthy levels.  Based on our 17 Phillip Recession Indicators, 16 out of 17 of them are unconfirmed and at relatively low levels. The corporate debt levels are also benign (Figure 3), with credit spread far below the levels during the Global Financial Crisis. As the 2y10y yield spread has yet to invert, more triggers are needed before we see a clear indication of an imminent recession.

With the Fed signalling no rate hikes for this year and the balance sheet runoff to end in September, the Fed will be a net buyer of treasuries once again. With the Fed prepared to restart quantitative easing, we do not see a high likelihood of a recession as the Fed has the ammunition to boost the economy in the event of a sharp downturn this year. 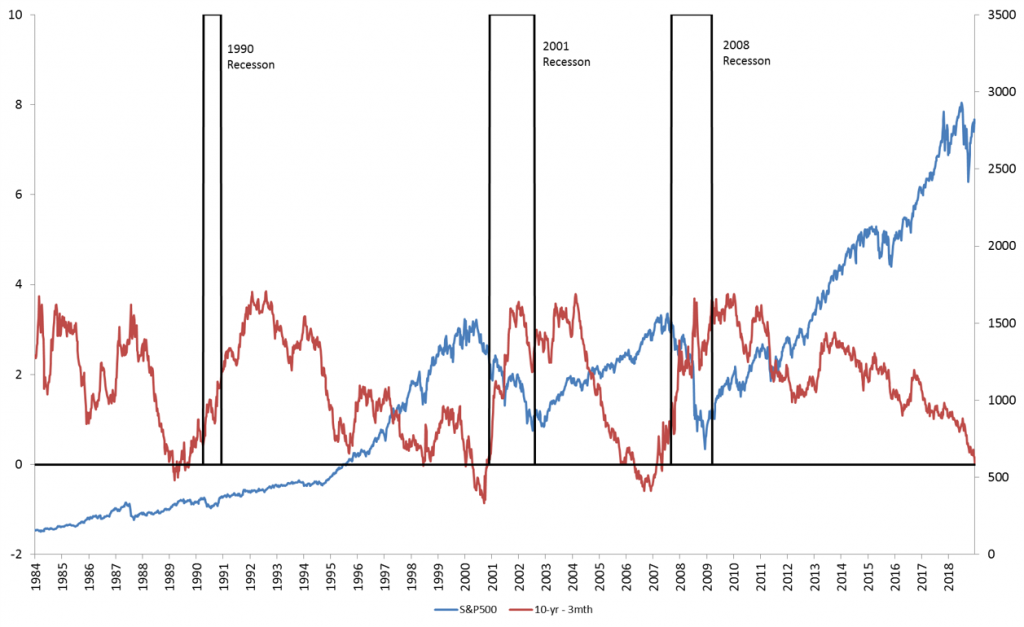