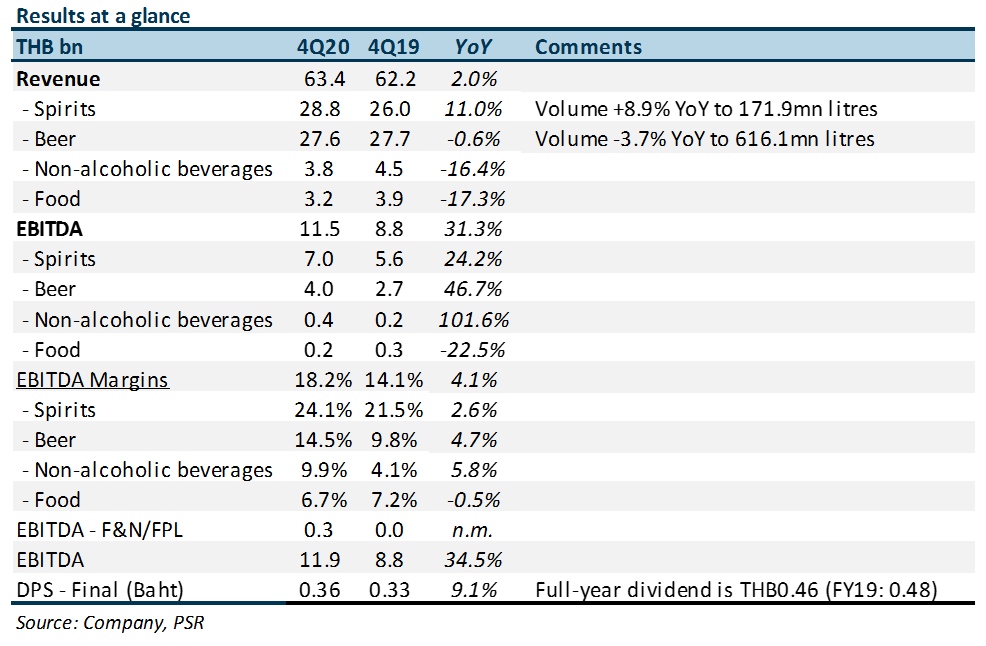 + Recovery in spirit sales. Revenue growth came from price increases earlier this year and better volumes as customers traded down to lower-priced white spirits. Alcohol consumption in major cities was hurt by fewer tourists and migrant workers. But workers returning to their homes – mainly in the north-east – drove consumption in the rural areas. Spirit sales in Myanmar were affected by a second wave of infections which forced about more lockdowns and lower economic activity.

THBEV managed to increase its earnings in FY20, ex-one-offs, despite lockdowns, economic weakness and tighter regulations on alcohol consumption. To cope with these, it bludgeoned its marketing and distribution spending, which dropped 14% YoY or THB4bn (S$180mn).

For FY21e, we are expecting revenue growth from spirit volume growth of 3% and beer volume growth of 4%. We expect gross margins to improve, primarily from the spirits division. Plans to raise used bottles for white spirits from 30-40% to above 50% should help with packaging costs. These formed 6.7% of FY20 revenue.

EBITDA margins in FY21e could also be aided by a continued tight lid on sales and marketing expenses. We expect THBEV to keep costs at almost the same level as last year: 9.8% of FY21e sales vs 9.7% in FY20. If it increases spending at all, it would be to respond to aggressive promotions by competitors.

Elsewhere, Sabeco is expected to make a soft recovery. Any significant pick-up will depend on: i) the ability of its new Saigon Chill product to compete in the sub-premium category of beers; and ii) the enforcement of regulations on alcohol consumption.

We maintain our BUY, with stock catalysts expected from rebound in spirits volume and beer volumes as economic growth recovers and dine -in activities resume. We raise FY21e EPS (cents) by 4% on account of healthier sales volumes. Our earnings estimates was raised 7% in local currency terms but we dialled back our SGD/THB assumptions by 3% points.  Our TP remains based on 18x PE, its average in the past five years.