Banks reported sharp decline in NIMs during 2Q20 with double-digit declines in bps across the board compared to a year ago (Figure 1). Quarterly average NIM (1.57%) across the banks is approximately 10 bps lower than previous quarterly low of 1.65% observed in 2013 despite similar levels of interest rates (Figure 2).

The sharp decline was exacerbated by huge deposit inflows experienced during the quarter as well as a lagged repricing of deposits. As such, we are expecting NIM to recover slightly in subsequent quarters with repricing in deposits and liquidity outflow. 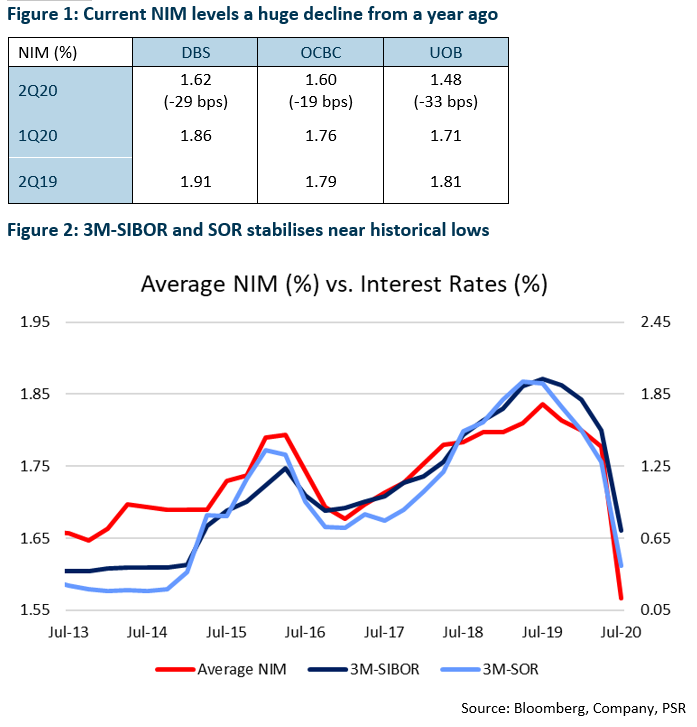 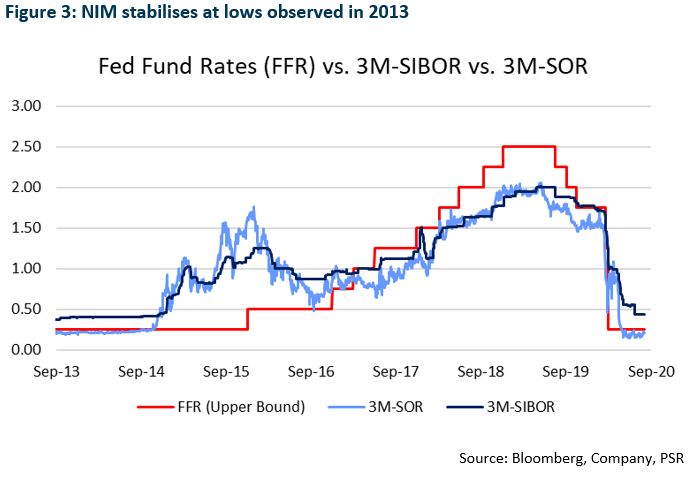 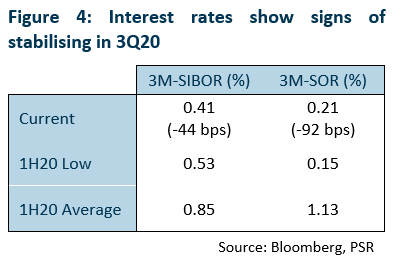 Weakness in business loans was a result of fall in loans across industries such as general commerce (-6.2% YoY), financial institutions (-2.5%) and professional & private individuals (-9.6%), which offset growth in other industries such as manufacturing (+1.2%), transport, storage & communication (+7.2%) and business services (+23.8%).

Consumer loans fell by 3.44% YoY as Singapore exits from the Circuit Breaker in April and May. Weakness observed was even across the board, but credit card loans showed signs of recovery, growing 2.9% MoM. 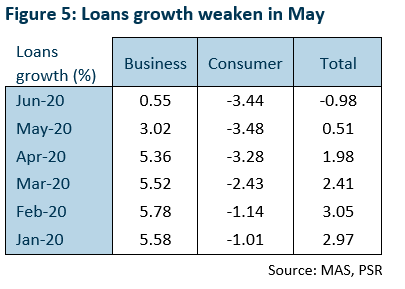 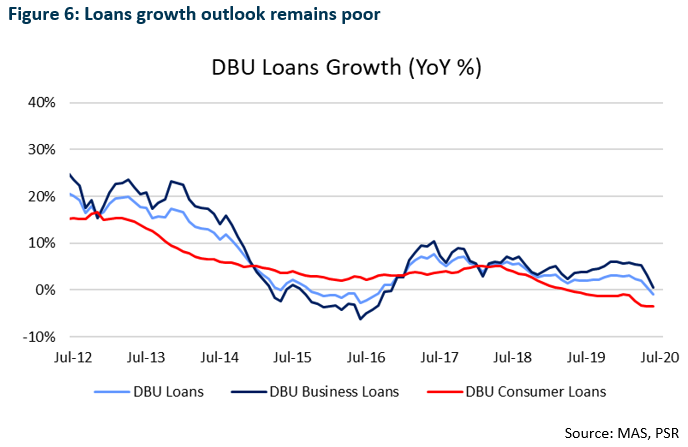 As the COVID-19 pandemic continues to cripple global economies, banks have started building up their allowances in anticipation of deterioration in asset quality. In 1Q20, the three banks have guided for credit costs between 80 to 130 bps which will be spread over two years.

As of 1H20, there has been no changes in credit cost guidance from the banks and the banks have built up reserves between 20 to 45% of their guided credit costs (Figure 7). 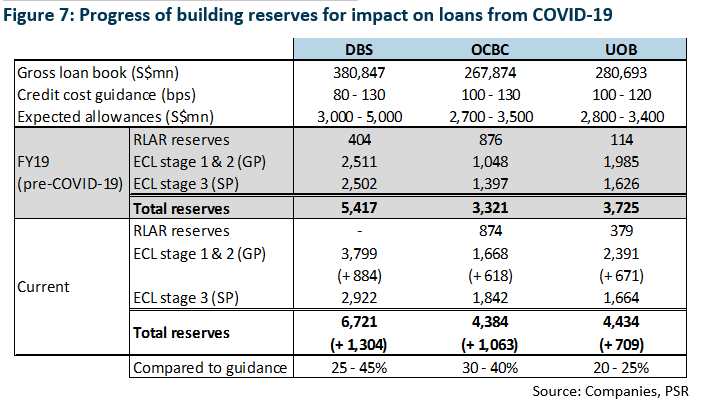 Book-building seems well underway for DBS and OCBC, as increase in reserves in 1H20 represents at least 25% of total expected allowances to be booked over the next two years in the worst-case scenario where credit costs hit 130 bps.

While total reserves increment of S$709mn seem to be on the low end for UOB, it was due to lower SP recognised in 1H20. The bank’s GP increment of S$671mn in 1H20 is at similar levels compared to DBS and OCBC.

Prudent reserves by the banks continue to put them in a good position to weather the economic impact as a result of the pandemic.

On 29 July, MAS called upon the three local banks to cap dividends for the next four quarters at 60% of their respective FY19 amount in order to shore up capital and continue providing assistance to the economy through lending. Based on 1H20 figures, the savings as a result of the cut in dividends will reduce the impact on CET-1 levels of the respective banks by 0.2% to 0.4% (Figure 8).

Under the new dividend guidance by MAS, dividends from DBS, UOB and OCBC will capped at S$0.72, S$0.78 and S$0.318 per share for the next four quarters respectively. 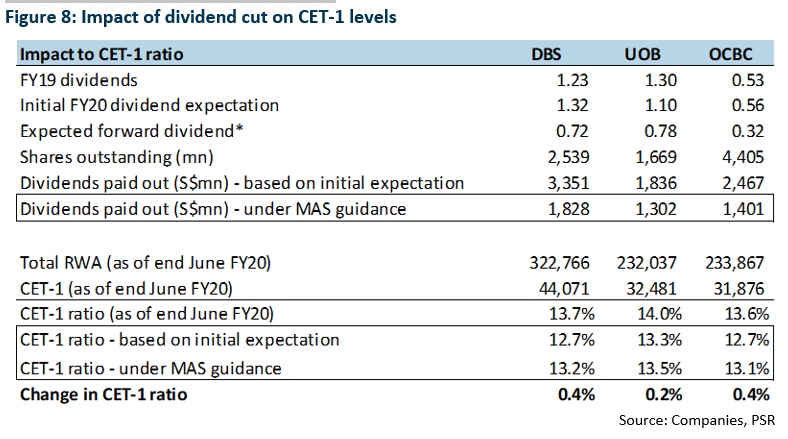 The banks are also required to provide scrip dividend as a dividend option for the next 12 months. This means that investors will be able to opt to receive shares in place of their cash for dividends. Based on 1H20 payout, scrip dividend for DBS and UOB will be offered at no discount while OCBC will be maintaining previous scrip dividend policy of a 10% discount.

DDAV rebounded in July as well to 1.05mn contracts, a 27% increment YoY. This is a contrast to 4Q20 which saw an average DDAV of 0.89mn contracts (-18% YoY). SGX’s FTSE Taiwan Index Futures contract also made its debut in July to record more than 80,000 contracts in less than 10 trading days in July.

SGX will be rolling out a suite of equity derivative products with FTSE that will replace expiring MSCI products. We believe that SGX will see muted impact from the MSCI contract cessation with the FTSE replacements, which should see faster uptake as compared to new product launches by SGX previously. 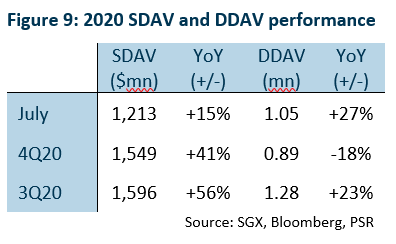 Maintain the Singapore Banking Sector at Neutral. Despite a cap in dividends which will see yields from the banks fall to between 3-4%, the banks remain in a good capital position to weather the headwinds from the COVID-19 pandemic. Banks should have past the trough as recovery in business momentum will benefit non-interest income and deposit repricing will ease pressures on NIM compression