SCI financial results are expected to be materially higher for 1H22 vs. last year, driven by the Conventional Energy segment.

Contrary to a report that Myanmar’s central bank has ordered a halt on repayment of foreign loans, its subsidiary in Myanmar has not received such a directive. It has also received prompt payment from its offtaker and continues to operate its Myanmar power plant.

+ Tariffs for power in India’s Tamil Nadu and Gujarat rose ~88% YoY in 1H22. Based on data from IEX, tariffs for power at Tamil Nadu and Gujarat rose to ~6.36Rs/kWh from ~3.39Rs/kWh from the same period last year. The higher tariff was driven by high global oil prices and higher temperatures in the country. The International Energy Agency (IEA) recently revised upward India’s electricity demand to 7% from negative previously in light of the intense heatwave in the country.

On the back of this, we revise FY22e Conventional Energy revenue up marginally from $8.6bn to $8.8bn to account for better spark spreads for Sembcorp Cogen and India (Figure 3). 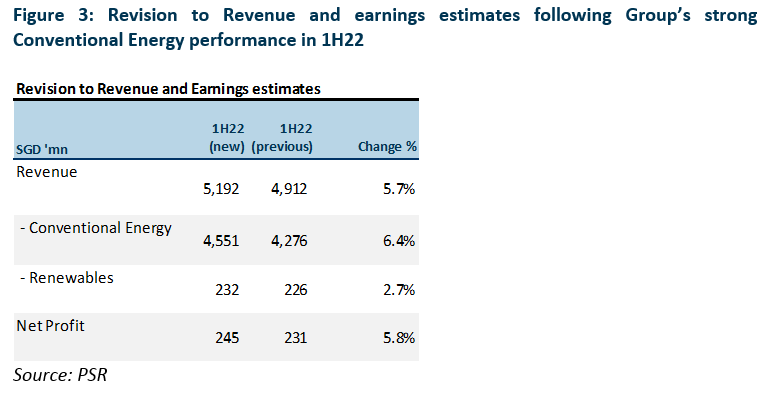 + On track to building up its green energy portfolio. SCI’s gross renewables capacity in operation and under development globally now stands at 6.8GW in 1H22 from 6.1GW as at end-2021 (Figure 2). This is ahead of our FY22e target of 7.3GW, accordingly, we revise our FY22e gross renewables capacity to 7.6GW on account of the Group’s aggressive build up of its renewables portfolio. We believe the company is on track to achieve its plans of increasing its renewable capacity to 10GW by 2025. We see the company’s transition toward green energy as an important driver of its re-rating.

– Headwinds in China property market to put a drag on Group’s Urban development business. China’s property market has weakened sharply in the past year as a result of a government clampdown on excessive borrowings by developers, and a Covid-19 induced economic slowdown (Figure 4). We believe this will hurt the Group’s land sales in China, though the impact is not expected to be significant as China account for just 6% of the Group’s total saleable land.

We expect the group to continue with its transition to sustainable solutions and sustainable development. Despite its ambitious growth plans, it will not require any equity fund-raising, relying entirely on internal sources.

The Conventional Energy segment continued to perform well in the first half of this year as global energy markets rose in tandem with commodity prices. For the rest of 2022, we expect this segment to be supported by energy markets and the continued uncertainty brought about by the Ukraine conflict.

However, we expect the slowdown in the Chinese property market to offset some of the growth from the Conventional Energy and Renewable Energy segment.

The Group continues to actively seek deals in India, China and the UK by leveraging its partnerships and platforms for their acquisitions.