Oversea-Chinese Banking Corp Ltd – Weighed down by insurance and allowances May 11, 2020 1478 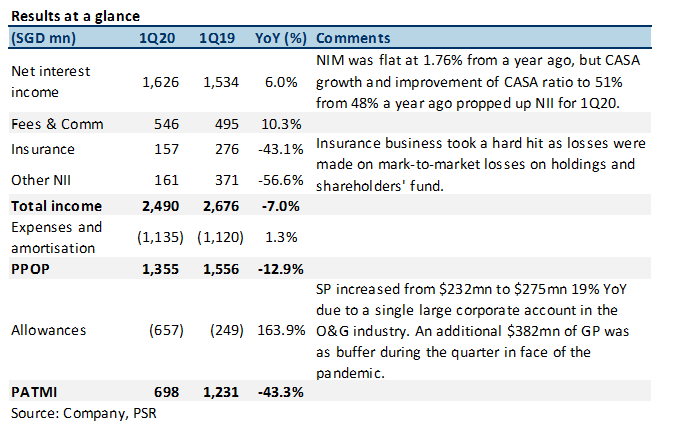 + NII grew 6% YoY as NIM was stable at 1.76% from a year ago. Loans grew 3% YoY as CASA ratio improved to 51% from 47% a year ago. The bank expects CASA to continue growing in volume to mitigate pressures from dwindling margins with interest rate cuts.

– Poor market conditions weighed down by Great Eastern. The Great Eastern franchise continues to grow operationally, with NBEV growing 15% and TWNS up 21% from a year ago. However, this was more than offset by mark-to-market losses in GE’s investment portfolio due to weaker investment environment. This resulted in a drop of 94% in contribution to OCBC from $290mn a year ago to $18mn in 1Q20.

– Exposure to O&G continues to contribute to higher credit costs. $275mn in SP was charged in 1Q20 with the majority of contribution as a result of a large exposure to a local O&G trader. A new O&G trader has surfaced to potentially put a strain on SP for OCBC in subsequent quarters. The bank believes instances of fraudulent activities to be isolated instances and not a prevalent practice.

Earnings continue to swing to the tune of GE’s performance. Adverse mark-to-market losses were incurred in 1Q20 due to the trough of the market sell-off in March. Moving forward, the market volatility will continue to dictate the performance of GE, which in turn affects OCBC’s earnings.

Front-loading provisions in Q1 may provide a reprieve to earnings subsequently. OCBC guided for 50-60 bps per year in credit costs over the next two years. Its credit cost of 86 bps in 1Q20 may signal softening credit costs in the subsequent quarters heading into FY2021.

CET-1 ratio remains healthy at 14.3%, up from 14.2% a year ago. Strong capital puts OCBC in a good position to weather credit crunch from the poor economic outlook. Moving forward, the bank looks to maintain within range of 12.5-13.5% levels while striving to contain on the higher end to ensure its ability to cope with impact from the pandemic. Its dividend policy will also be contingent on its ability to maintain its strong capital position.

We maintain ACCUMULATE at a lower target price of S$9.14 (previously S$12.10). We revised our TP after taking into account the lower interest rate environment. NIM forecast was compressed by 10 bps, while additional credit costs of $300mn were added per quarter for the next 2 years to reflect the deteriorating economic conditions. 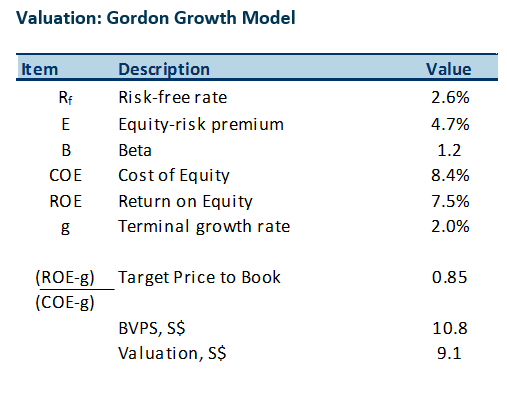