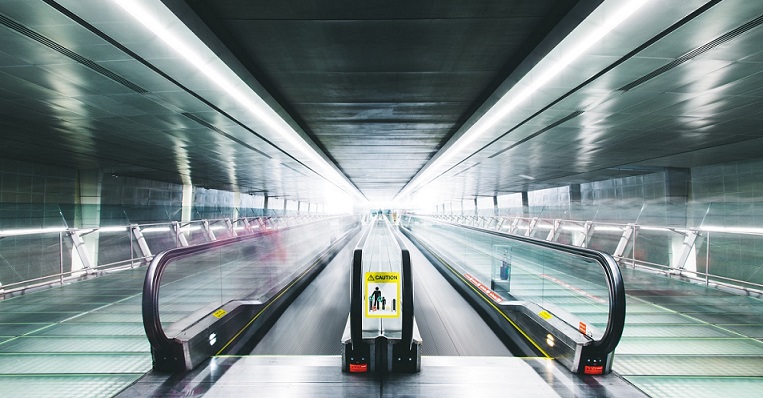 We maintain Overweight on the Land Transport sector, on the basis of regulatory reviews and changes that address profitability and sustainability.

We have a “Buy” rating on ComfortDelGro Corp with a target price of $2.50. We forecast earnings to have bottomed in FY17, with the Public Transport Services segment largely driving earnings going forward. Regulatory changes on fare formula and licencing of private-hire car companies could be catalysts for a re-rating of the stock. 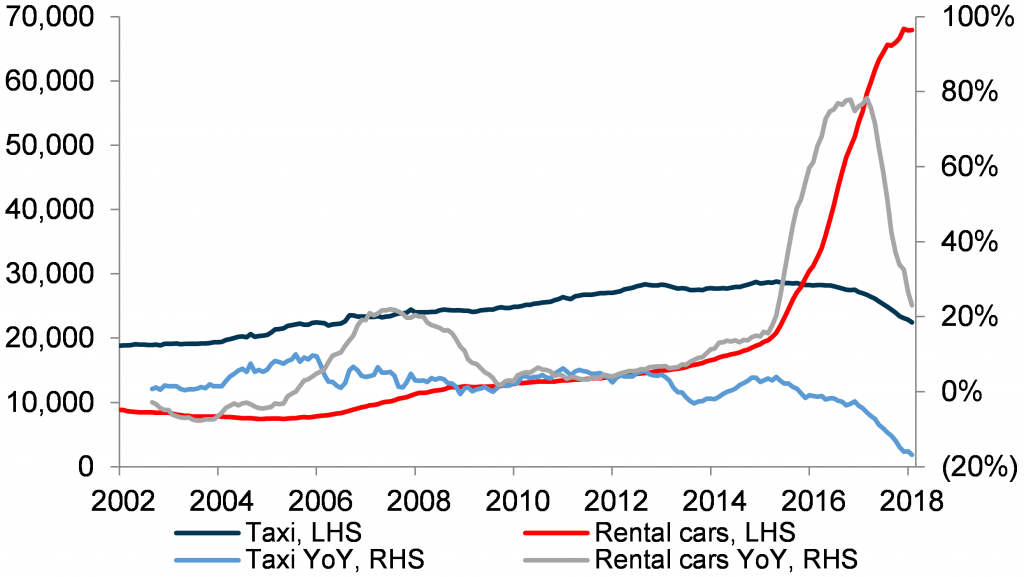 Not only has Rental cars YoY population growth tapered, but the population has contracted -0.2% YTD. For context, Taxi population had a larger contraction of -3.0% YTD. This could be an early indication of an oversupply of Rental cars and an impending rationalisation of its population, thus supporting our view that the equilibrium could be near. We would like to see the monthly YoY contraction in Taxi population start to moderate as well, to serve as an additional indicator that the worst could be over for the Taxi segment.

Amid media reports again in early-March that a deal was being finalised, Uber on Mar 14 launched its carpooling app, Uber Commute. Uber Commute is conceptually similar to GrabHitch, though with some differences. Uber Commute is widely believed to not have a material impact on profits for Uber.

During the recent Singapore Budget debate, Second Minister for Transport Ng Chee Meng had expressed the government’s desire for the transport market to remain “open and contestable”. Thus signalling a monopoly is not ideal – having a dominant transport operator may not be in the best interest of commuters.

We do not speculate on whether a takeover of Uber by Grab in Southeast Asia would materialise. However, we offer two cases on how it could be beneficial or detrimental to the Taxi segment. Bull case: more rational pricing of commuter fares and driver incentives for private-hire cars, would shift some demand back to Taxis. Bear case: monopoly by Grab over the private-hire car business in Singapore, would put it in a better position to compete against Taxis.

Bus revenue for SBS Transit is expected to be higher YoY in 2018, mainly due to contribution from the Seletar package after taking over operations since Mar 11 this year. The contract was awarded in April 2017 through a competitive bidding process. The contract value of the package is $480mn over the five-year contract period, with an option for LTA to extend the contract term for an additional two years. Prior to this, the package was a combination of services operated by both SBS Transit and SMRT Buses under the negotiated price agreement.

SBS Transit was also awarded the Bukit Merah package in February 2018 through a competitive tender process. The contract value is $472mn over the five-year contract period, with an option for LTA to extend the contract term for an additional two years. The package will commence in 4Q 2018. Any upside from the package will be limited, as SBS Transit is the incumbent operator of the package under the negotiated price agreement.

The package is currently operated by SMRT Buses for four-years under the negotiated price agreement. It should conclude in 3Q 2020.

DTL has been loss-making since the commencement of Downtown Line Stage 1 (DTL1) in December 2013. We estimate accumulated losses for DTL came up to ~$150mn as at end of December 2017, with highest ever quarterly loss of ~$16mn in 4Q 2017. Losses over the years were due to start-up costs, as the DTL was progressively opened in three stages.

However, with the commencement of revenue service for DTL3 in October 2017, the full DTL is now operational and losses are expected to narrow as ridership ramps up to the normalised level.

The Land Transport Authority stated in a News Release on Feb 10, 2018 that daily weekday ridership on DTL has grown from 300k to 470k since DTL3 opened. This resulted in an average ridership of 279k for DTL in 2017. The normalised ridership level that is being projected for DTL is 500k.

With the fare reduction of -2.2% that was effective Dec 29, 2017, ComfortDelGro management expects DTL to only turn profitable in 2019. This is contingent on achieving 500k average daily ridership and pending the outcome of the fare adjustment at the end of 2018. A fare reduction at the end of 2018 would further delay DTL turning profitable. (Fare adjustments have historically come into effect at end-December.)

The PTC had announced on Apr 5, 2017 that it had commenced a review of the current fare formula. The current fare formula was adopted in late-2013 and it incorporates core Consumer Price Index, Wage Index, Energy Index and Productivity Extraction to derive the fare adjustment. The fare reduction experienced in the last few years was largely due to lower energy costs.

Transport Minister Khaw Boon Wan commented during the recent Singapore Budget debate that the current formula is “inadequate” and cheap fares are “not sustainable”. Costs have been rising, but fares have reduced – and he said that the current fare formula “can be improved to better track total costs”.

We highlight that only the Rail segment remains on a fare-revenue model, while the Bus segment has transitioned on Sep 1, 2016 to the government bus contracting model where a service fee is awarded through a competitive bidding process.

The LTA announced on Feb 14 that the NEL and SPLRT will transit to the NRFFF on Apr 1. SBS Transit will pay a Licence Charge to operate the rail lines, and that will go into the Railway Sinking Fund for the renewal of operating assets.

The Licence Charge Structure for SBS Transit’s NEL and SPLRT is identical to that of SMRT Trains. Recall that SMRT Trains’ North-South and East-West Lines (NSEWL), Circle Line (CCL) and Bukit Panjang LRT (BPLRT) had transitioned to the NRFF in 2016.

The transit to the NRFF will relieve SBS Transit from heavy capital expenditure and large fare-revenue risks. Large fare-revenue risk will be mitigated through a risk-sharing revenue collar. However, margin for NEL is expected to be lower going forward, due to the profit-sharing cap and collar structure of the NRFF. EBIT margin will be capped at 5%, with substantial profit-sharing to the LTA above the 5% cap. The current NEL EBIT margin is not disclosed, but we believe it to be in the mid- to high-teens. The LTA’s sharing of risk is limited to the amount of Licence Charge payable.