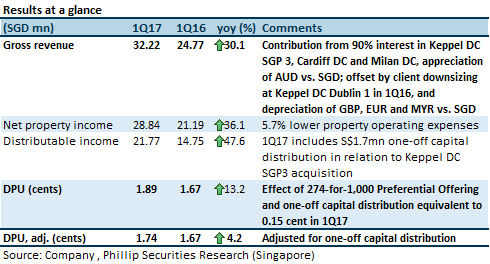 BroadGroup Consulting forecasts up to 2021 that new demand across the ten locations where Keppel DC REIT (KDCREIT) has a presence in to experience growth. The highest growth regions are Singapore, Australia and Malaysia, where the new demand compounded annual growth rate (CAGR) is expected to range from mid-teens to low-twenties. New demand at the European locations (London, Amsterdam, Dublin, Frankfurt, Milan and Cardiff) is expected to be slower, ranging from high-single-digit to high-teens. Of particular relevance are the locations where KDCREIT’s data centres operate as colocation or with impending lease expiry: Singapore (23.6% CAGR), Cyberjaya, Malaysia (15.8% CAGR), Sydney, Australia (14.4% CAGR) and Dublin (15.2% CAGR). KDCREIT’s biggest single-country exposure is to Singapore, where new supply is expected to put pressure on utilisation in 2017, but long term improvement in utilisation remains intact.

Portfolio weighted average lease expiry (WALE) by leased lettable area stands at 9.2 years with 10% expiring in 2017. Occupancy at KDC SGP 1 improved quarter-on-quarter to 87.3% from 84.7%, as vacant space was leased out to a new tenant. Of the four major expiries in 2017, one colocation lease in a SGP DC was renewed at a marginally higher rate than previous. The three remaining expiries are located overseas, and renewal negotiations are ongoing. These expiries are likely to be at Gore Hill, Basis Bay and Dublin 1.

KDCREIT’s gearing stands at 27.9% – one of the lowest within the S-REITs universe. The Manager outlined its strategy of utilising the debt headroom to make acquisitions first, then pare it down through an equity fund raising exercise as gearing approaches 40%. This 30% target gearing could be relaxed in future, as the asset base of the REIT grows.

Our gross rental income assumptions have been tweaked as we refresh foreign currency exchange rate assumptions after FY18e. We have also updated our non-controlling interest estimates in relation to KDC SGP 3.  The relatively low gearing of 27.9% warrants KDCREIT to trade at a premium to NAV, in our view. Our target price represents an implied forward 1.2x FY17e P/NAV. We have a “Neutral” rating on the stock as we believe that the attractiveness of the asset class (data centre) has been adequately priced-in.