Japan-Weekly Strategy Report “The Yen Depreciation and Inbound Travel, Lockdowns in China and Infrastructure Investment ” May 4, 2022 143 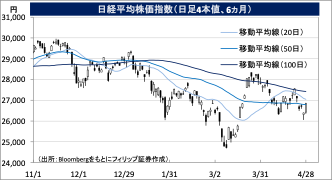 ■The Yen Depreciation and Inbound Travel, Lockdowns in China and Infrastructure Investment

At the Monetary Policy Meeting held between the 27-28th, the Bank of Japan decided via a majority to continue the existing quantitative and qualitative monetary easing policy. Excluding the instance where a bid will clearly not be expected, there have been no fresh topics except for the implementation of the “fixed-rate purchase operations for consecutive days” every business day where unlimited purchases will be made of the Japanese government bonds at a yield of 0.25%, and it was regarded in the market that the Bank of Japan had approved further depreciation of the yen, which has caused the appreciation of the dollar against the yen to progress. At a press conference on the 26th, although Japanese Prime Minister Kishida supports and predicted the Bank of Japan’s monetary policy in aiming for a 2% inflation, at the same time, the government announced a comprehensive emergency countermeasure of a project scale of 13 trillion yen as a countermeasure against the sudden rise in prices of commodities and crude oil. In the midst of that, since there was the viewpoint that they may move towards curbing the appreciation of the dollar against the yen which results from promoting a sudden rise in prices via import inflation, there was attention on the movements of the Bank of Japan.

However, the factor involving the U.S. side is also important for the foreign exchange market. Monetary tightening is predicted from the central bank FRB’s balance sheet reduction and the significant policy interest rate hike of 0.50% at the FOMC on 3-4th May, and significant hikes in interest rates are expected to continue for the time being. In addition, there has been rising caution on the combined slowdown of the global economy due to concerns on the stop of the supply of natural gas to Europe due to Russia, and prolonged reinforcement of lockdowns to curb the spread of COVID-19 in China, etc., which is preventing an increase in the U.S. long-term interest rates. Perhaps there is an increasing possibility of the dollar/yen exchange rate having an adjustment outcome as a rebound against the drastic appreciation of the dollar against the yen from March this year onwards.

From the perspective of stock investment, there has been attention on the aspect of the yen depreciation potentially increasing inbound (Japan tourism by foreigners) consumption demand. Although the Japanese government has raised the limit on the number of entrants into Japan daily from 7,000 to 10,000 on the 10th, there is a stark difference between other major developed countries which have no restrictions on the number of entrants. The same goes for border control measures. There may be an aspect of rising appeal in Japanese stock investment resulting from the yen depreciation leading to inbound consumption, such as “binge shopping”, etc. in the future by foreigners when border restrictions ease. Compared to the “binge shopping” in the previous round, presently, cross-border e-commerce has evolved and there will likely be attention on the possibility of a diversification of stocks benefiting from inbound travel which includes those related to IT.

In China, while it has been reported that President Xi Jinping “hopes for China to have an economic growth rate that surpasses the U.S.” and there being indications of a significant reduction in this year’s targeted growth rate from the existing 5.5%, on the other hand, President Xi has called for efforts to reinforce infrastructure construction involving large-scale energy / water resource projects and shipping / transportation hubs, such as airports. Japanese enterprises related to infrastructure investment, such as raw materials and nonferrous metals, etc. will likely be promising. Perhaps we ought to view that the greater the negative impact on the economy from an increase in the scale of lockdowns, the greater the scale of infrastructure investment as its rebound.

Established in 1947 when Takachiho Electric integrated with Onishi Electric in 2009. They are a subsidiary of Toyota Tsusho (8015) and is a trading company specialising in electronic materials / components, which is positioned as a chemicals / electronics business under the same group. Expands to smartphone / in-vehicle / medical equipment.

For FY2022/3 results announced on 22/4, net sales increased by 11.3% to 200.646 billion yen compared to the previous year and operating income increased by 52.8% to 8.346 billion yen. Despite the confusion involving the supply network and the supply shortage in semiconductors, etc., there has been an increase in demand in various fields, such as industrial equipment and the 5G-related as well as a recovery in automobile demand. Amongst those, they are focusing their efforts on various components related to those for automobiles.

For its FY2023/3 plan, net sales is expected to increase by 12.4% to 225.5 billion yen compared to the previous year, operating income to increase by 7.2% to 8.95 billion yen and annual dividend to increase by 7 yen to 60 yen. With priority shifting from the existing focus on smartphones to automobiles / medical-related / industrial equipment, their policy is to work towards stabilising earnings by shifting to fields with predicted increase in demand. The company’s basic policy involving profit distribution is a consolidated payout ratio of 40% and above, and attention will likely be on their dividend yield as well.

・For 9M (Apr-Dec) results of FY2022/3 announced on 31/1, net sales increased by 7.5% to 854.2 billion yen compared to the same period the previous year and business profit including equity method profit and loss increased by 8.4% to 108.4 billion yen. All 3 major business segments increased in revenue. In business profit, despite a decrease in profit from increased costs of frozen food and seasonings / foodstuff, the 81% increase in healthcare, etc. has contributed.

・For its full year plan, net sales is expected to increase by 7.1% to 1.148 trillion yen compared to the previous year and business profit to increase by 6.1% to 120 billion yen. With there being growth in the Japanese market for household frozen food, production quantity of frozen gyoza in Japan for 2021 increased significantly

spot in Japan as a long-standing frozen gyoza manufacturer. Nichirei (2871) has announced an increase in prices from August onwards for household frozen food. There will likely be an aspect where it is easier to work towards an increase in earnings via a price increase in frozen food by a renowned brand.