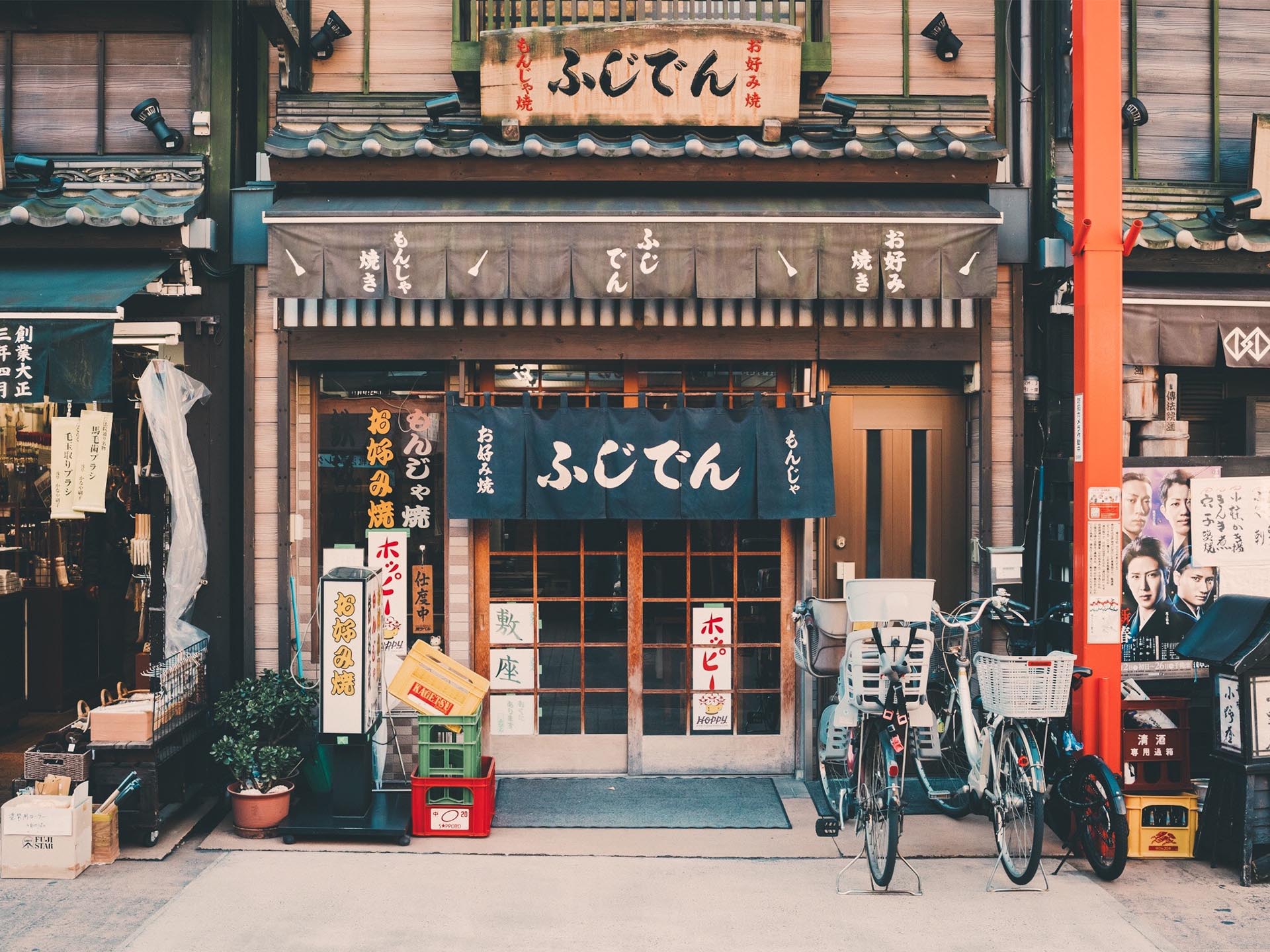 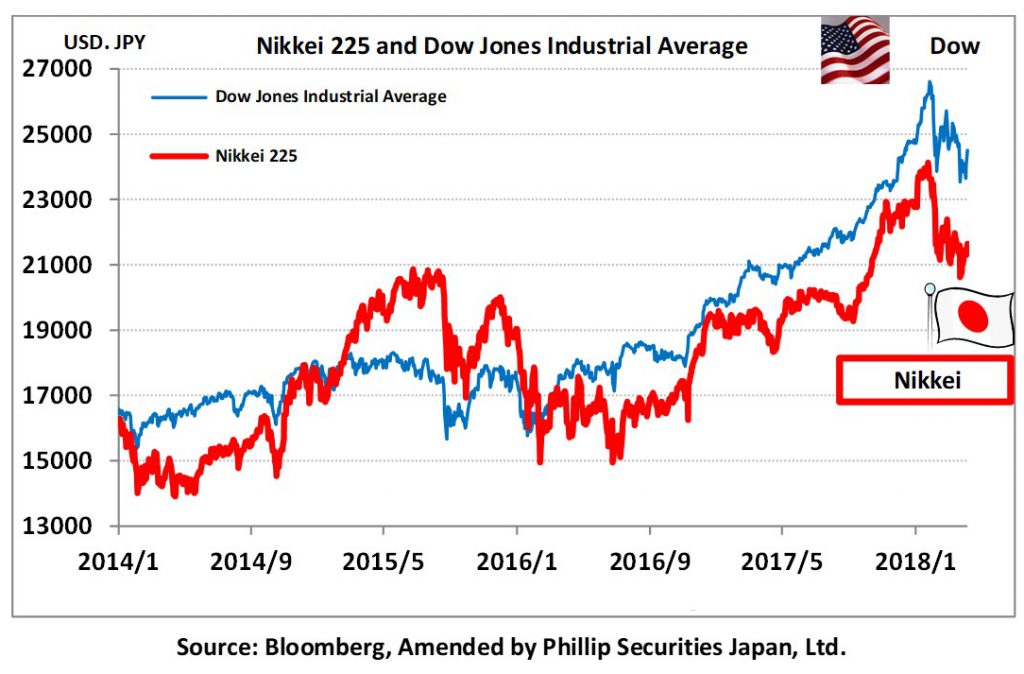 For the period from Jan-Mar, 2018, net buying of spot trades and futures by foreign investors reached Yen8.7 trillion.  This net purchase reached about Yen1.8 trillion in April, with the monthly rate of increase being 6.10% for the Nikkei Average, and 4.30% for TOPIX.  However, with the consecutive holidays in May, prices of Japanese stocks are facing resistance against further rises.

Major newspapers are forecasting net income for full-year 2019/3 results of domestic listed companies to fall by 4% compared to the previous period.  This will be the first decrease in three years.  Meanwhile, EPS growth rate for US S&P500 constituent companies is expected to be 22.2% for the full-year 2018/12 period.  Even for the 2019/12 full-year period, for which a reaction to tax cuts is expected, EPS growth rate is still forecast to reach two digits at 10.5%.  In contrast, performance forecasts for domestic companies are not bright.  However, the forex assumptions of many domestic companies are conservative at Yen105/1USD.  If the actual rate changes to a weaker yen than these company plans, then there is a likelihood of results being better than expected.  Therefore, there is a possibility of more positive reviews of companies for which we had negative impressions at the time of announcement of their results.  In addition, positive market sentiment will be a factor supporting the market.  The Index of Business Conditions for March announced on 5/9 improved by 0.4 points from the previous month to 116.4, improving for two consecutive months and maintaining a high level.  In the Economy Watcher survey released on 5/10, both the current and future DIs had risen.

However, with the US leaving the Iran nuclear agreement potentially destabilizing the Middle-East, and with President Trump strengthening protectionist policies towards mid-term elections, there are still strong uncertain factors surrounding the market. We therefore need to pay attention to changes in the external environment, including the spirit of reconciliation between the US and North Korea.  We expect inflow of funds by foreign investors to increase after events such as the US-North Korea summit. 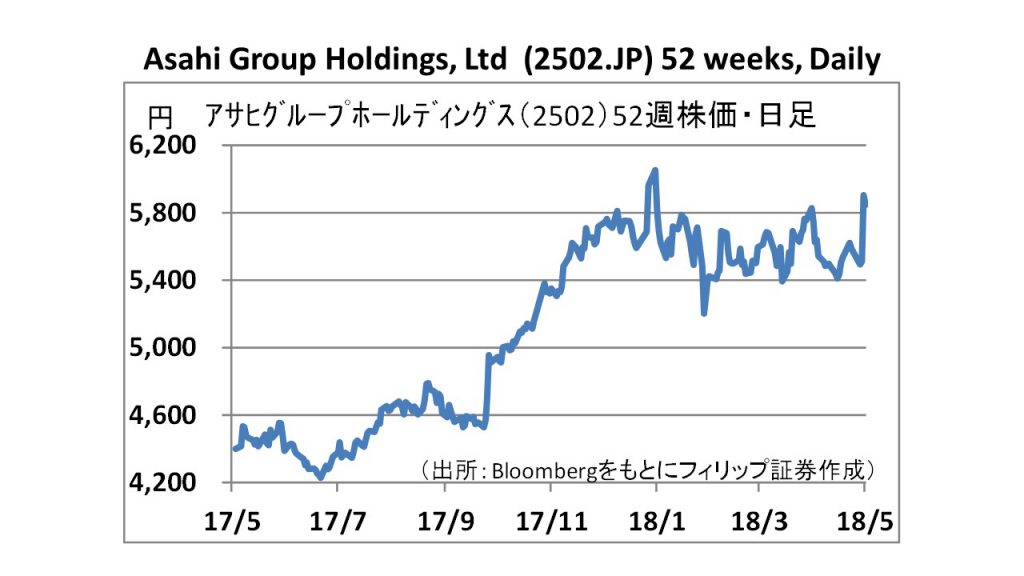 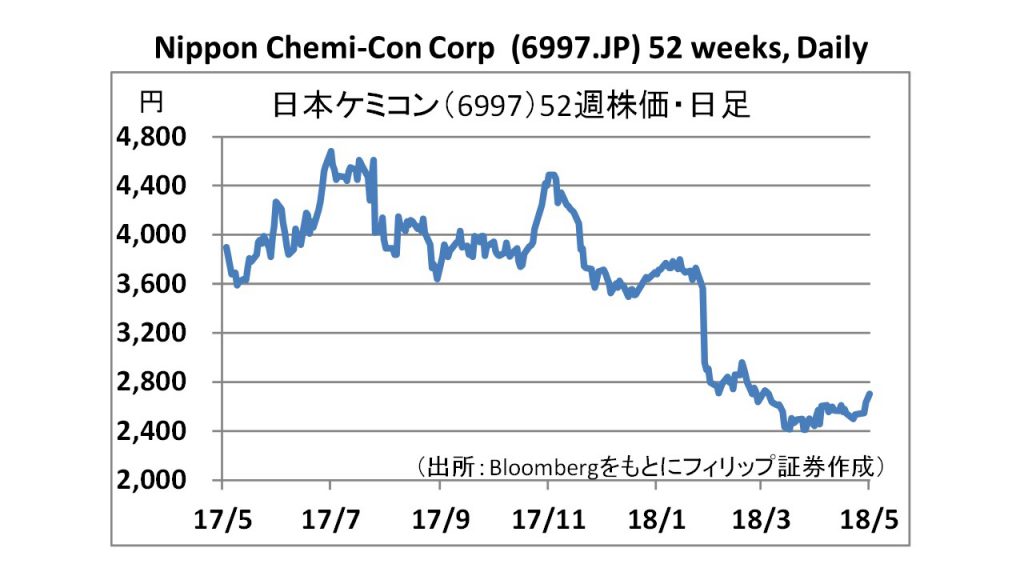 ・For FY2018/3, net sales increased by 14.7% to 133.362 billion yen compared to the same period the previous year,  operating income increased by 74.3% to 5.818 billion yen, and net income decreased to ▲16.056 billion yen, turning into a loss from the previous period of 840 million yen.  Demand in the household appliance and automobile sectors increased mainly in China, but extraordinary losses recorded in connection with judicial dealings related to US anti-trust law violation had negatively impacted results.

・For FY2019/3 plan, net sales is expected to increase by 5.0% to 140 billion yen compared to the previous year, operating income to increase by 28.9% to 7.5 billion yen, and net income to turn positive at 5.5 billion yen.  The plan is to expand sales of aluminum electrolytic capacitors, its main product, to the automotive and industrial equipment sectors where market growth is expected.