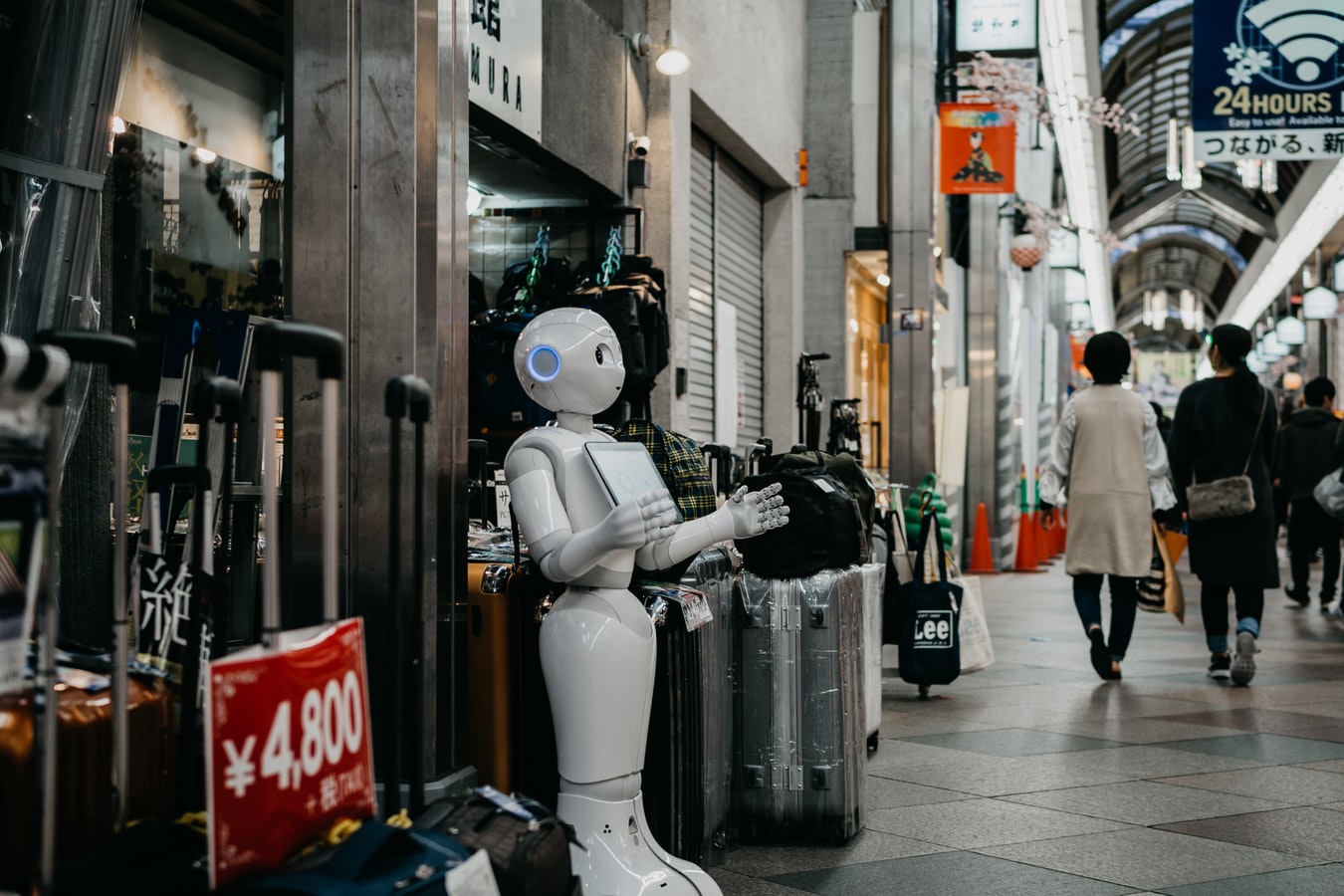 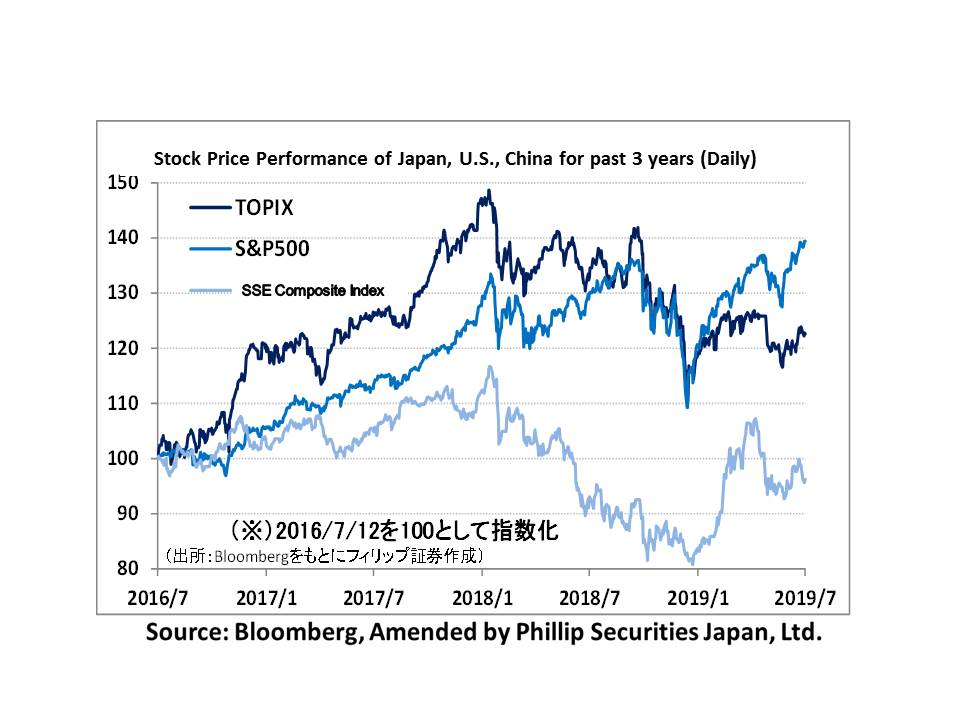 With the June US employment data announced being viewed as evidence of a strong US economy, and in response to a decline in expectations on an US interest rate cut as a result of that, the Japanese stock market experienced strong selling after 8/7. There have been many events happening concurrently.  Domestically, the House of Councilors electoral campaigning is now in full swing. On the other hand, we are also seeing changes in the international situation such as export restrictions on semiconductor materials to South Korea. Overseas, the Iranian situation has become tense, and we have seen pessimistic views of global banking stocks including Deutsche Bank.  Meanwhile, the NY Dow exceeded 27,000 points on 11/7. In contrast, trading of Japanese stocks throughout the week had remained thin, with the Nikkei Average generally trading with small fluctuations while consciously watching the low price of 21,500 points.

According to the announcement by the Ministry of Internal Affairs and Communications on 10/7, the population of Japanese people at the beginning of 2019 had decreased by 433,239 persons compared to the previous year.  Indeed, the decrease year-on-year was the largest ever. In view of the “declining birthrate / ageing population” phenomenon, I would like to point out the following two points from the perspective of investment strategy.

Firstly, rising labor costs due to an aggravated labor shortage situation are causing rapid changes in business management.  In restaurants and retail stores, system investment for cashless payment, self-checkout, and self-service is spreading rapidly in order to reduce dependency on manpower. In addition, within corporate organizations, there is a marked shift away from “work style reform”, involving realization of various working styles such as lifting of bans on side businesses and correction of long working hours, towards system investments for “work efficiency improvement”, whereby regular office work and customer inquiries are systematized. The introduction of software such as groupware and video conferencing applications via monthly charges is also spreading. According to the June Japan Tankan issued on 1/7, capital investment plans for the year 2019 have increased significantly from three months ago, from large corporations to mid-size companies and SMEs, regardless of whether they are from the manufacturing or non-manufacturing sector. Let’s look forward to this trend spreading in the Japan stock market too.

Secondly, there are concerns about the sustainability of the current pension system as a result of the declining birthrate and ageing population. As of the end of 2019/5, iDeCo (Individual-type Defined Contribution Pension Plan) already has more than 1.25 million subscribers, and corporate-type defined contribution pension plan has reached 7.15 million subscribers.  It is thought that the spread of the “defined contribution pension” system, whereby one manages one’s own pensions, will accelerate. In this regard, the social role of financial institutions providing such services will become greater. As we confront the first national elections of the Reiwa era, it is therefore worthwhile to consider investment strategies from the perspective of Japanese social issues. 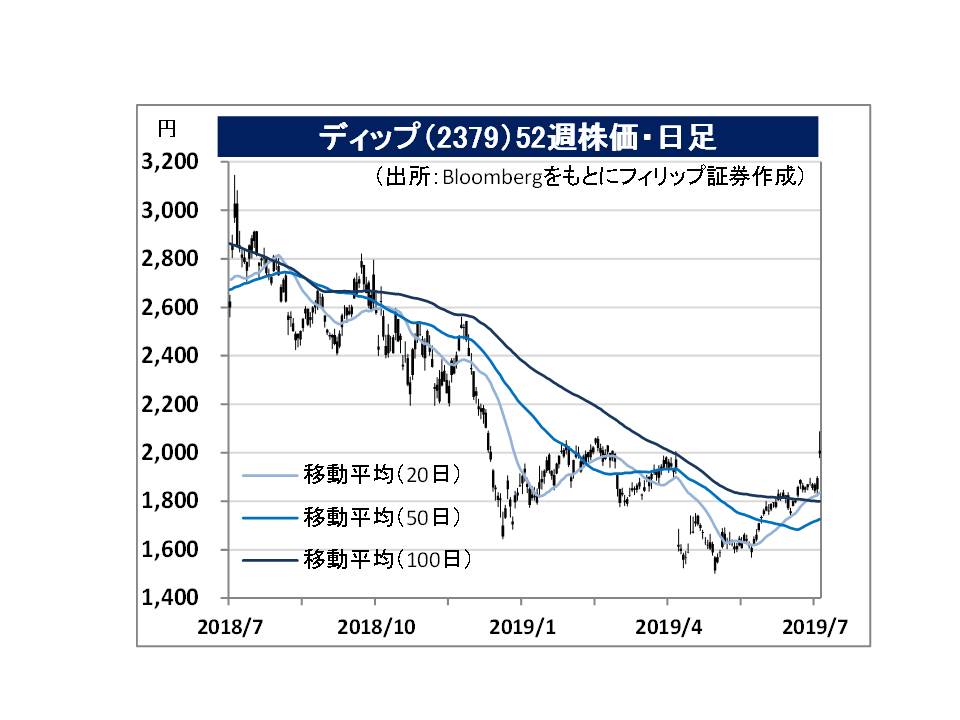 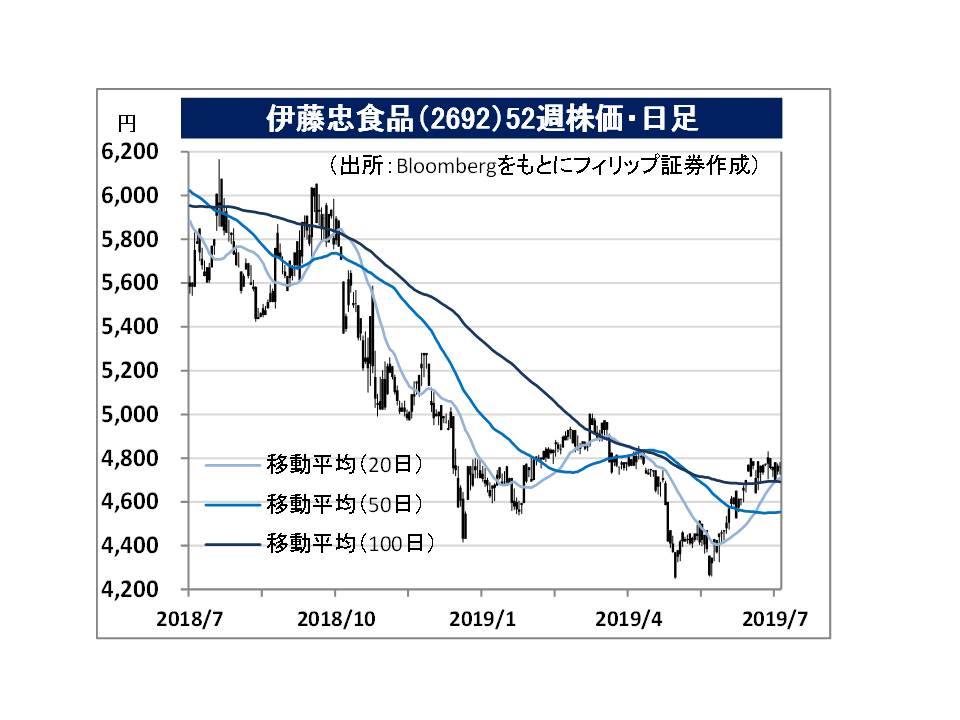 ・Established in 1918. Formed a capital and business alliance with Itochu Corp (8001) in 1982, with Itochu Corp currently holding 50.7%. Wholesale of liquors and foods in the Food Wholesale Business, and storage and transport of these goods in related businesses.

・For FY2019/3 results announced on 26/4, net sales increased by 0.9% to 667.128 billion yen compared to the same period the previous year, operating income decreased by 4.8% to 4.042 billion yen, and current income decreased by 17.9% to 3.309 billion yen. Sales had increased due to increase in transactions with organized retailers and development of sales channels. However, profits decreased due to higher SG&A expenses such as distribution expenses, and also in response to the posting of extraordinary gains in the previous year.

・For FY2020/3 plan, net sales is expected to increase by 4.9% to 700.0 billion yen compared to the previous year, and operating income to increase by 16.3% to 4.7 billion yen. While also the parent company of FamilyMart, Itochu Corp has established a JV on 15/1 called “Y&I Holdings’ with Yamae Hisano (8108), based in Kyushu, to strengthen its response to the Seven & I group. While there are concerns over conflicts of interest involved in a dual parent-subsidiary listing, we are also hoping that actions will be taken to resolve this issue in the future.