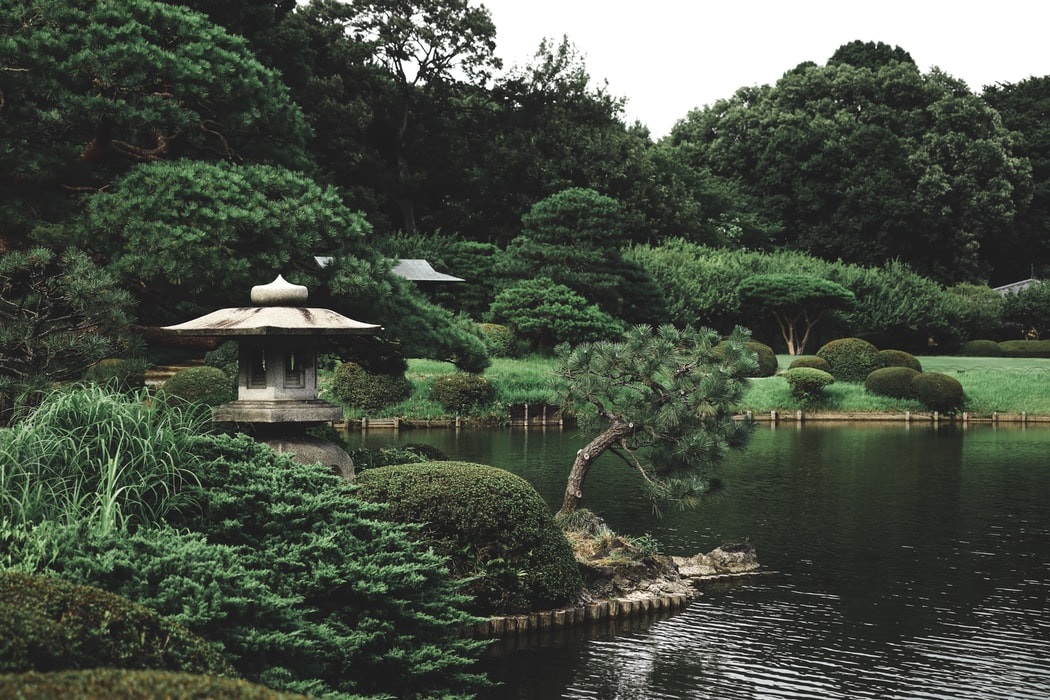 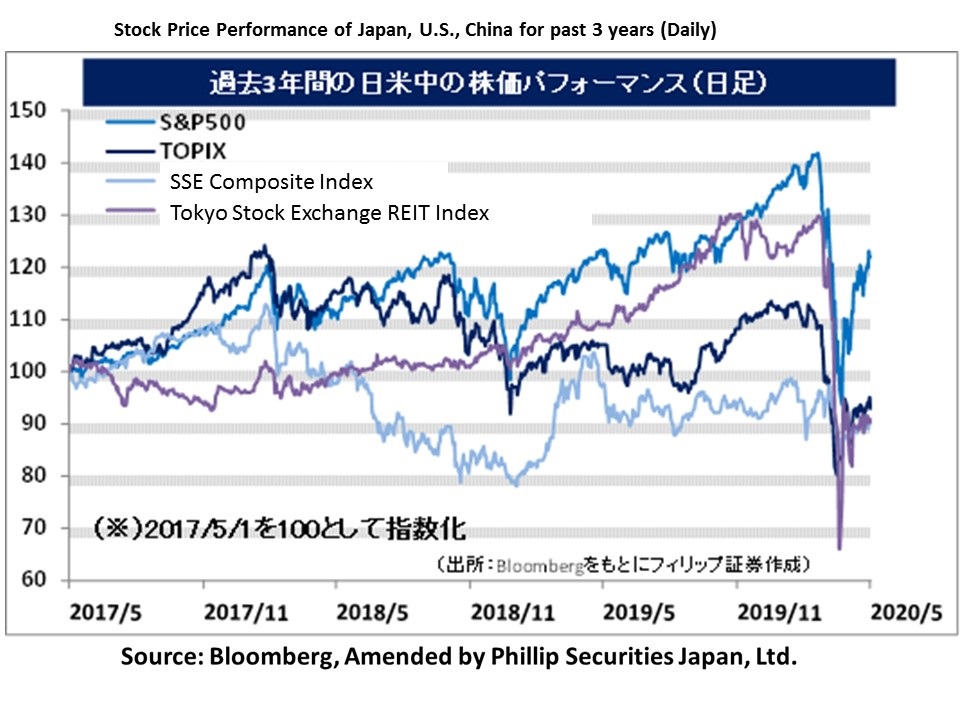 Is a New Common Sense Forming in Japanese Stock Investment?

With the decreasing trend in the number of new COVID-19 infections in Tokyo with 47 infections on 29/4 and 46 infections on 30/4, the government embarked on adjustments to extend the declaration of a state of emergency to end May, which was due to end on 6/5. If we recall last year during the 10-day holiday following the change in the Japanese era name from Heisei to Reiwa, after the Nikkei average rose to the 22,300 point level in mid-April as a result of buybacks of credit sales positions prior to the holidays, the declining trend grew stronger after the holidays, which saw it fall to the 20,200 point level in mid-June, hence, the market tends to be strong in April and weak in May. Also, for this year, currently in U.S. stocks, the Jan-Mar term financial results of Alphabet (GOOGL), Microsoft (MSFT), Facebook (FB), Apple (APPL) and Amazon.com (AMZN) were announced between 28/4 to 30/4, and we are seeing a situation where it is easy to be aware of a sense of an exhaustion of source material influencing the market. Just at that moment, the Nikkei average rose to 20,365 points on 30/4, which has achieved a return to the half price of the range of decline from the high price of 24,115 points since 17/1 last year and the low price of 16,358 points since 19/3 last year. This can be said to be a state where there is a pause in the rise.

With regard to the Japanese stock market forecast in the future, it is believed that the response of stock prices to the dollar/yen exchange rate will play a vital role. After the global stock market plunge due to COVID-19 effects and since the sharp rise in demand for dollar funds, which is a key currency, the “risk off dollar appreciation and risk on dollar depreciation” is starting to stabilise. The common sense in Japanese stock investments thus far of “the yen appreciating against the dollar being a source of material for selling Japanese stocks” is starting to lose its credibility. The reason for this is the shift in funds to risk funds simultaneously brought about by the depreciation of the dollar that was induced by vigorous monetary easing policies by the U.S. Federal Reserve Board (FRB). In the future, we could see a rise in situations where market participants would be stumped at the increase in Japanese stocks following a progression of the yen appreciation.

In addition, benefits in the cost aspect involving cheaper crude oil are likely to significantly influence the Japanese economy. Furthermore, with the effects of COVID-19 raging throughout the world, the English BBC broadcast released a special feature on “the healthiest countries to live in”, where Japan was listed as the top. It praises the high standard of lifestyle and culture where “a health-conscious culture limits the impact of COVID-19 risks to a minimum”. In the future, when there is an easing of restrictions on the movement of people across borders, there is a chance that foreigners will come to see Japan as an even more attractive country, which could be a good opportunity to trade against the trend for inbound travel-related stocks. Through this COVID-19 pandemic experience, perhaps we will see a new emphasis where the health and hygiene aspect would serve as the basis for the selection of targets to invest global money in. Either way, we may come to require a completely new form of common sense in the investment world. 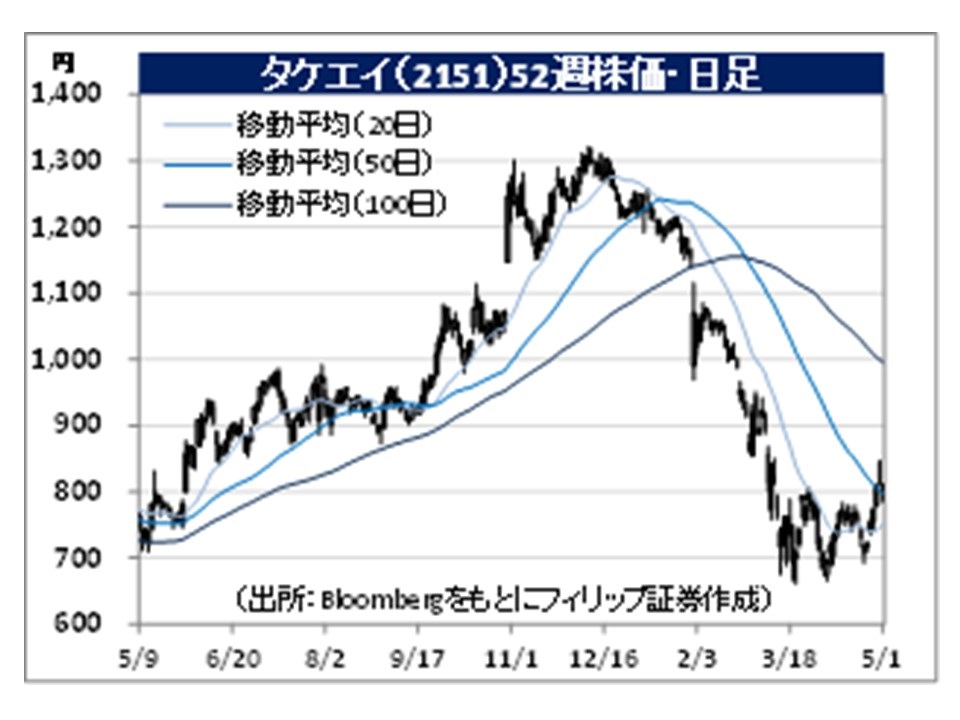 ・For 3Q (Apr-Dec) results of FY2020/3 announced on 30/1, net sales increased by 17.2% to 27.29 billion yen compared to the same period the previous year and operating income increased by 55.2% to 2.223 billion yen. Their mainstay waste processing and recycling businesses was strong due to an increase in the processing of disaster waste from natural disasters with net sales increasing by 10.1% to 19.368 billion yen and operating income increasing by 70.0% to 1.868 billion yen.

・For its full year plan, net sales is expected to increase by 13.4% to 36.6 billion yen compared to the previous year and operating income to increase by 45.8% to 3.1 billion yen. On 23/4, company announced that they would inherit the biomass power generation business for 4.3 billion yen that was withdrawn by Mitsui E&S Holdings (7003) to improve finances. Green Power Ichihara, which supports the business, is the metropolis’ largest scale woody biomass power generation business operator, and we can expect an expansion of the renewable energy business from the acquisition of a large-scale power station. 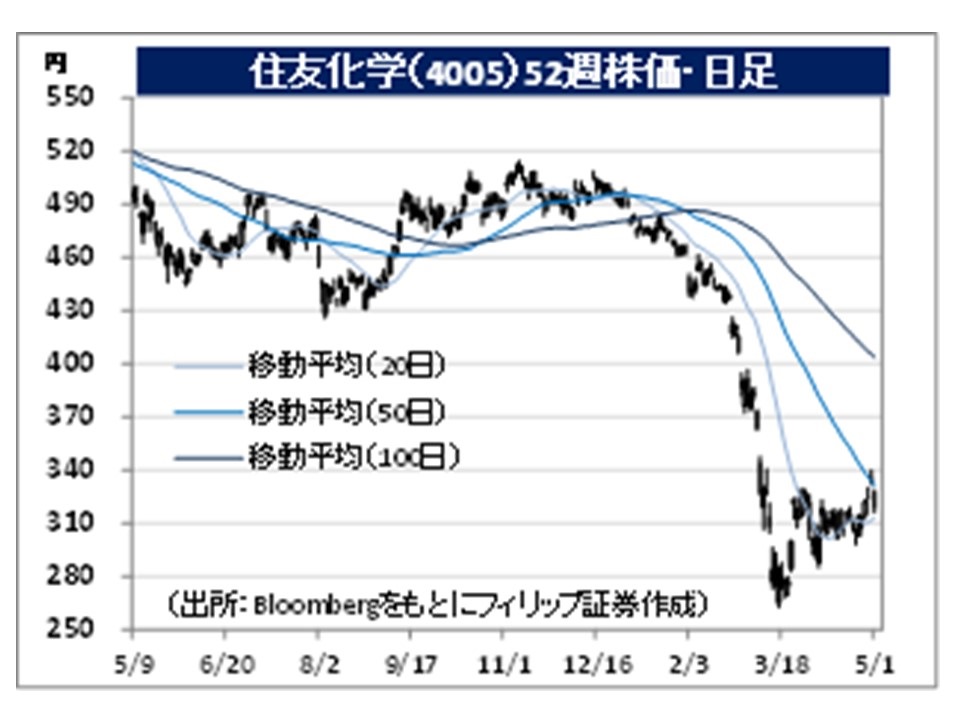 ・Founded in 1913 in Niihama, Ehime Prefecture. Offers products supporting the lifestyles of people and a wide range of industries globally across 5 business fields, which is petrochemistry, energy and functional materials, information electron chemistry, the health and agriculture-related and pharmaceuticals.

・For its full year plan, sales revenue is expected to increase by 0.5% to 2.33 trillion yen compared to the previous year and core operating profit to decrease by 21.7% to 160 billion yen. The company possesses listed subsidiaries such as Sumitomo Dainippon Pharma (4506) and Koei Chemical (4367), and we can expect a focus and selection of corporate groups that have gone through a resolution of parent-subsidiary listing. Also, if low crude oil prices persist, global competitiveness of petrochemical complexes will increase and we can expect this to benefit their petrochemical business.