Japan-Weekly Strategy Report ”COVID-19 Exposing Differences Between the US and Japan?” September 25, 2020 208 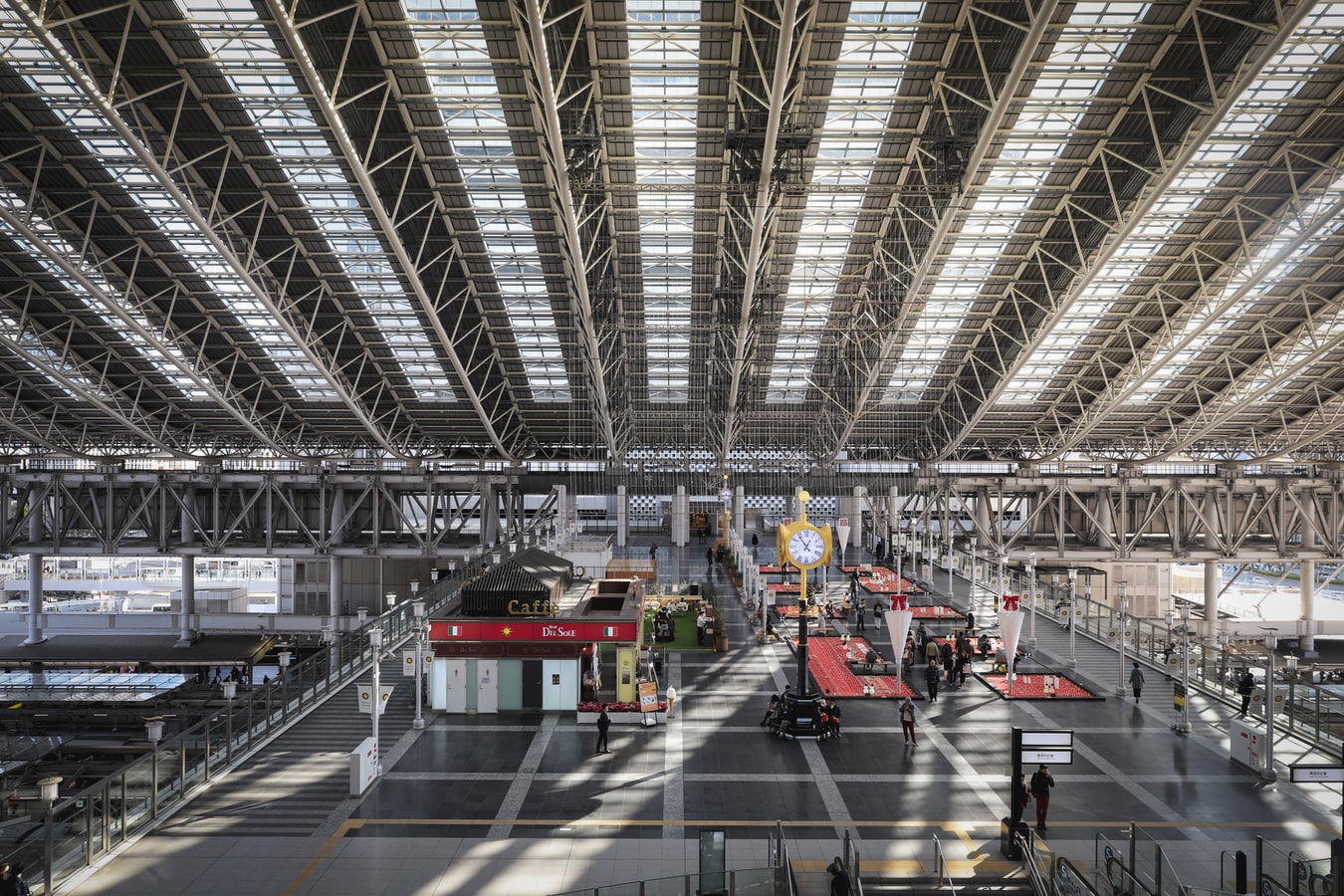 ”COVID-19 Exposing Differences Between the US and Japan?”

With the inauguration of the new Suga Cabinet, the path to be taken by the Japanese stock market for next year appears to be taking shape, albeit vaguely. Currently, in terms of the Nikkei Average, Japanese stocks have remained steady in the 23,000 points range, unaffected by the decline in the US stock market which is centered on high-tech stocks.

The first reason for this is the increase in new selling date settlements for system margin trading.  The average daily trading value of the first section of the TSE for 10 business days from 6/3, when the Nikkei Average closing price fell below 21,000 points, to 19/3, when the Nikkei Average hit a year-to-date low, swelled to 3.8 trillion yen.  There could have been a large supply-demand factor whereby new credit sales positions during that period were forced to be repurchased before the due dates.  It should be noted that after 23/9 next week, the factors supporting the market owing to repurchases before the due dates will weaken.

The second factor is the strong recovery of the Chinese economy.  As mentioned in the weekly report of 31st August, 2020, entitled “China’s 5G-related / New Infrastructure Investments”, investments in next-generation infrastructure are accelerating in China.  Looking at the growth in industrial production in August, we can infer that Japanese manufacturers in a wide range of industries with production bases in China are beginning to reap benefits.  However, it may be premature to expect that the Japanese stock market will continue to be strong even if the amount of investment for “new infrastructure” is expected to trend upwards.  The upcoming US presidential election might be a stumbling block.  Incumbent President Trump is reportedly trailing Democratic candidate Biden at this time.  President Trump is reportedly looking forward to an early supply of the Covid-19 vaccine, but currently supply of the vaccine before the presidential election looks difficult.

On the other hand, we can expect the Covid-19 vaccine to be available for the Tokyo Olympic Games which had been

postponed to next summer.  It is indeed timely that the Suga Cabinet was formed on 16/9.  At a press conference, PM Suga said, “Countering the spread of the Covid-19 pandemic is my top priority”” and added, “We aim to secure a vaccine that will reach all citizens by the first half of next year”.  With the high approval rating after the establishment of the new cabinet, a snap election for the House of Representatives is expected to be held in the very near future.  In this regard, we may possibly see in the near future a new cabinet which has gained public confidence pushing the Japanese economy strongly towards the hosting of the Olympic Games next summer.

Let’s look forward to a rejuvenation of the “Olympics Market” which had been badly beaten down by the postponement of the Olympics and the spread of Covid-19 infections.  In this regard, we can look forward to a “Return / Reversal” market arising through sports, inbound, and entertainment-related sectors. 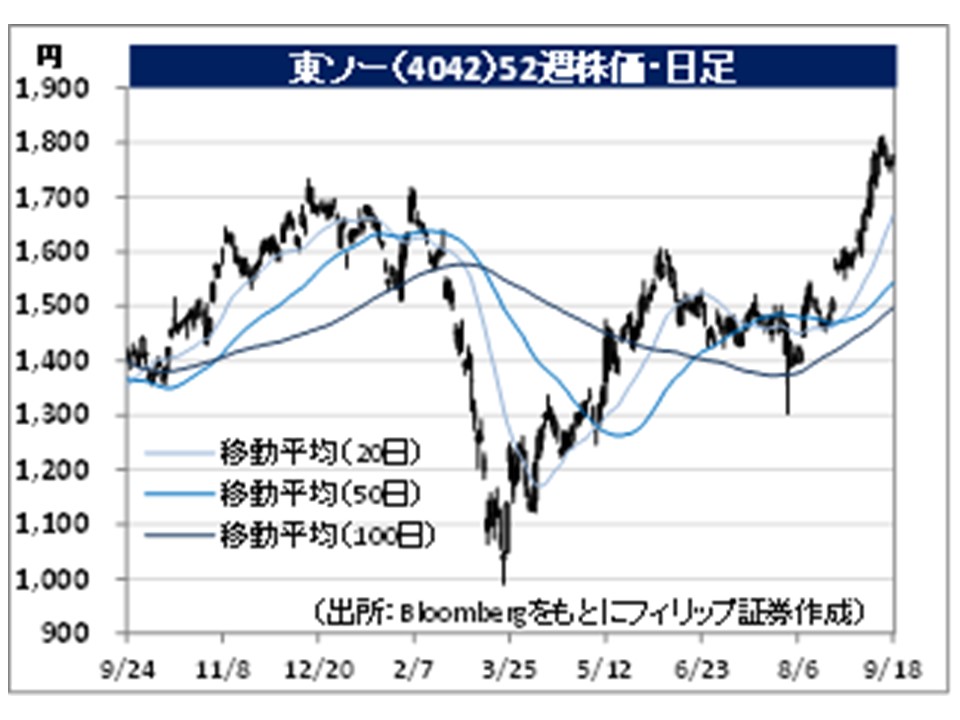 ・For 1Q (Apr-Jun) results of FY2021/3 announced on 3/8, net sales decreased by 18.8% to 156.529 billion yen compared to the same period the previous year, and operating income fell into the red to minus 943 million yen from 16.112 billion yen in the same period of the previous year.  Global demand contraction due to the Covid-19 pandemic had caused the decline in sales, and the decrease in production related to regular maintenance as well as the rise in fixed cost rates had affected profits.

・Company plan for FY2021/3 has not been determined because the impact of the spread of Covid-19 cannot be reasonably determined at this time.  According to the 1H (Apr-Sep) company plan, operating income is expected to decrease by 72.8% to 11 billion yen.  The Petrochemical business and the Chlor-Alkali business are expected to be in the red for 1H, but caustic soda production was seen to be accelerating according to China’s industrial production data for the August period.  Noteworthy as a company that is likely to benefit from low PBR and China’s economic recovery. 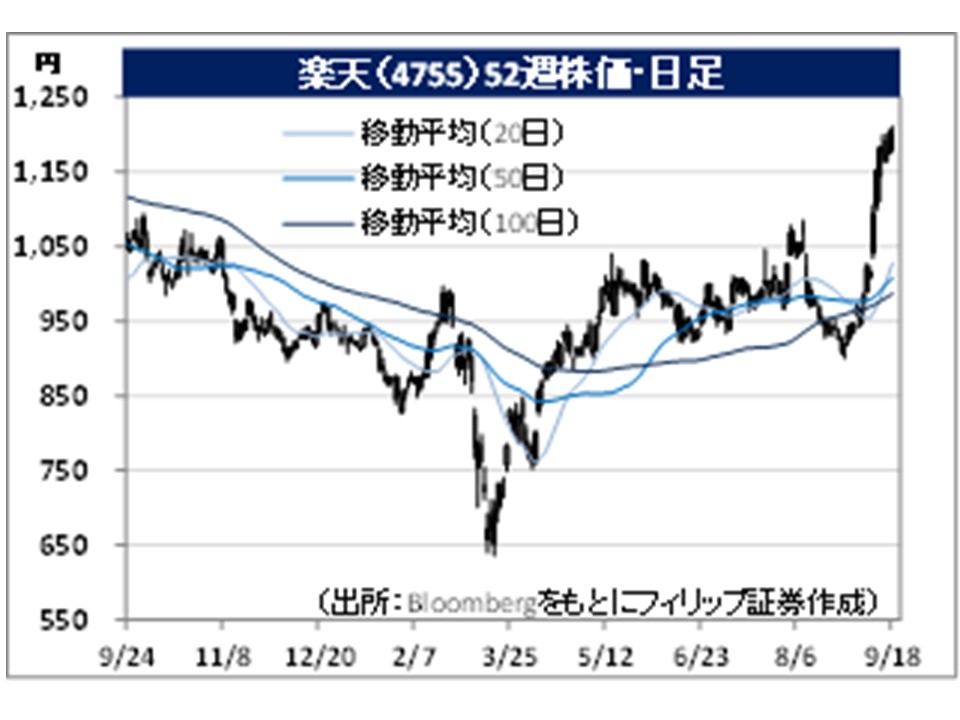 ・Established in 1997.  Operates three business segments, namely “Internet Services” for various EC sites such as the “Rakuten Global Market”, “Fintech” for various financial services via the internet, and “Mobile” for communication services.

・For its full year plan, revenue excluding securities services is expected to increase by double digits from the previous year.  With price reductions expected under the Suga administration, the mobile carrier business has made communication charges for the new rate plans free for one year.  On 16/9, Rakuten Mobile signed a MOU with Spanish communications giant Telefonica to establish its own base station maintenance skills for next-generation 5G communications.  Looks like the aim of company’s mobile business strategy is to gain an overseas share of base station development.4