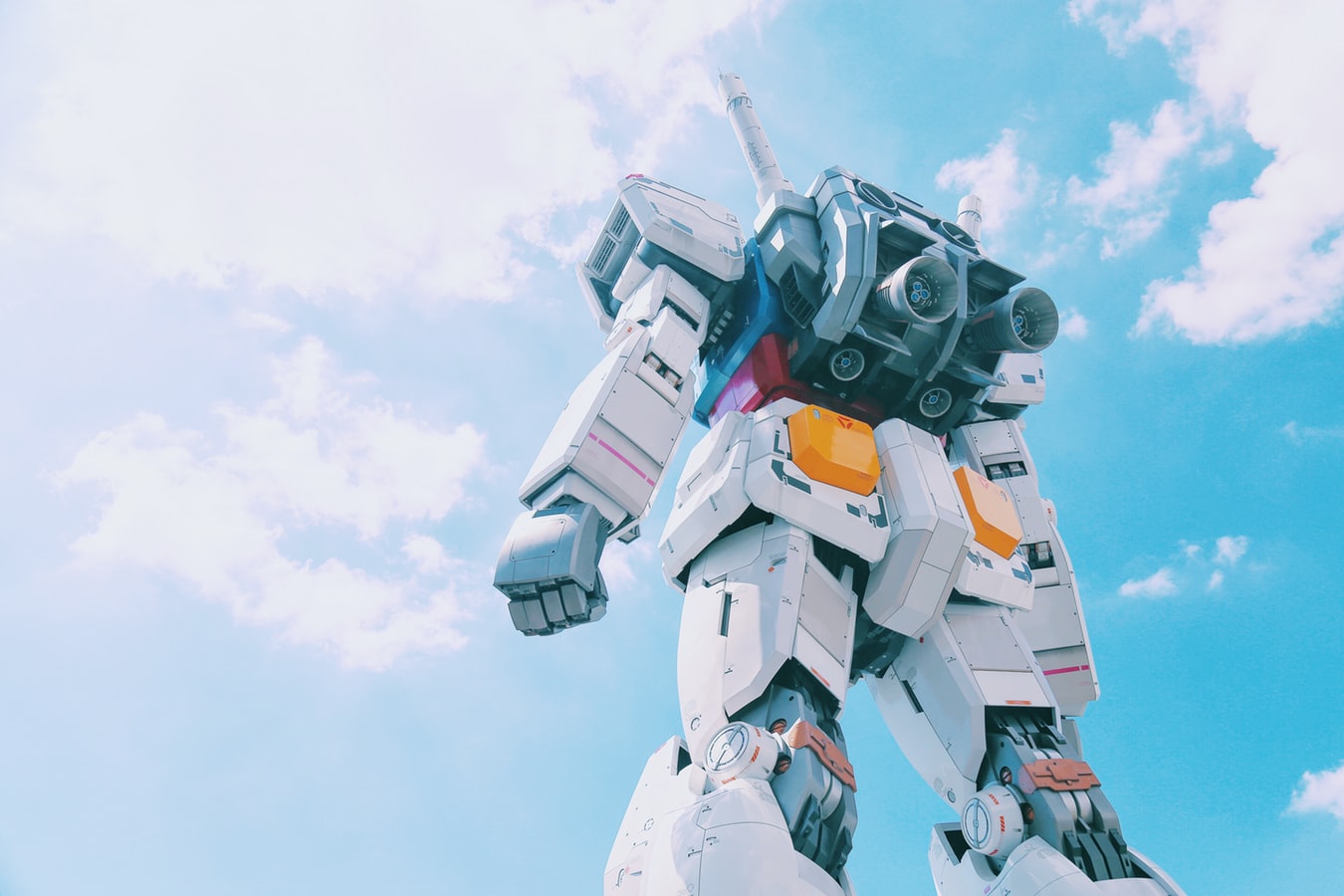 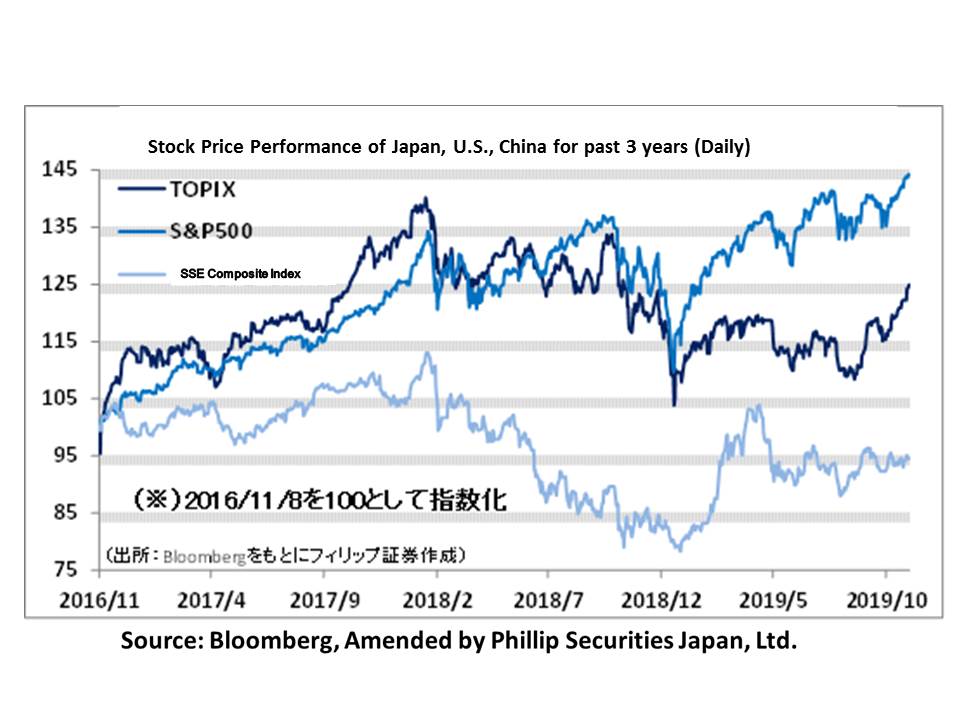 The Nikkei Average surpassed 23,000 points on 5/11, and then exceeded 23,500 points on 8/11, against the backdrop of
expectations of progress in US-China discussions involving a partial deal on the US-China trade war and phasing out of
additional tariffs already in force. The Nikkei Average of 23,000 points is seen as a resistance price range where the
upside was strongly suppressed in Nov-Dec two years ago and again in May-Aug last year. With the Japanese stock
market rising through this “milestone”, there will be increasing expectations for it to rise further in future.

The driving force behind all these is supply and demand related to futures transactions. The “unsettled sales balance of
arbitrage trading” related to “forward buying / long sales” positions as of 1/11 was 1.2491 trillion yen, down from the
2.0666 trillion yen as of 6/9. It is surmised that spot buybacks in order to relieve positions had led to the rise in the
market. On the other hand, the “unsettled buying balance of arbitrage trading” related to “forward selling / spot
purchase” positions was 555.0 billion yen, and the net unsettled sales balance of arbitrage trading after deducting
unsettled buying balance remains high. For the time being, supply and demand situations will likely support the market.

Furthermore, we can see that there are some stocks of which the stock prices are unlikely to drop even if profits had
declined in the latest financial results. While factors such as supply and demand relating to repurchase of credit sales do
exist, the “low PBR magic” relating to Japanese stocks also cannot be ignored. The Nikkei Average has a tendency to
rebound when the weighted average PBR (Price to Book Ratio) is around 1.0. However, looking at individual stocks, the
situation remains that many stocks with PBR significantly lower than 1.0 are left as they are. Even if profits decline
compared to the same period of the previous year, if the profit itself is at a high level, then the market will focus on the
growth of the BPS (Book Value per Share) rather than the decline in profits. If the gap between the BPS and the stock
price increases, it is not unusual to see the stock price rising. In this way, especially for low PBR stocks, we can see a
hidden “magic” whereby stocks with declining profit levels are still being bought, even when we have considered their
fundamentals.

When looking at stock investment from a global perspective, offshore wind power generation that takes advantage of
the merit of Japan being surrounded by the sea is attracting attention as a renewable energy source. The “Act of
Promoting Utilization of Sea Areas in Development of Power Generation Facilities Using Maritime Renewable Energy
Resources” has already been implemented, and attention is being focused on construction and civil engineering-related
sectors that are strong in marine civil engineering. In the US, competition is intensifying over smartphone apps such as
video distribution and cloud games. Let’s therefore look toward companies with strong IP (Intellectual Property) in
popular characters and anime. We should also pay attention to companies that are driven by the shift of production
bases from China to Vietnam.
In the 11/11 issue, we will be covering Toei Animation (4816), Toyota Motor (7203), United Arrows (7606), Sumitomo
Corporation (8053), Itochu Corporation (8001) and Pan Pacific International HD (7532). 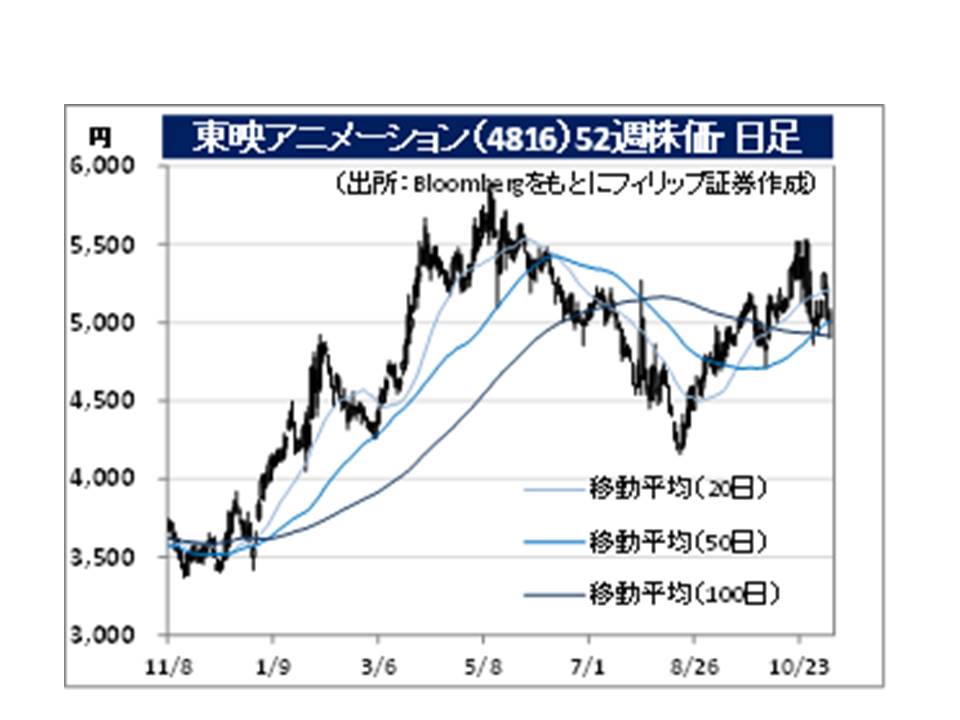 Toei Animation Co., Ltd (4816) 4,990 yen (8/11 closing price)
・Established in 1948. Involved with video production and sales business involving planning,
production, broadcast rights sales of various animation productions, licensing business that
licenses animation characters and receives royalty, and product sales business of animation
characters.
・For 1H (Apr-Sept) results of FY2020/3 announced on 25/10, net sales increased by 13.4% to
29.01 billion yen compared to the same period the previous year, operating income increased by
9.4% to 8.662 billion yen, and net income increased by 7.9% to 6.271 billion yen. Domestic and
overseas sales of app game rights and merchandising rights, as well as domestic tie-ups and sales
promotion licenses for theatrical release of movies had been strong.
・Company has revised its FY2020/3 forecast upwards on 23/10. Net sales is expected to
decrease by 1.3% to 55.0 billion yen compared to the previous year (original plan 46.2 billion
yen), and operating income to decrease by 4.7% to 15.0 billion yen (original plan 12.0 billion
yen). Depending on trends in sales of video distribution rights in China, there may be room to
absorb the impact of declines in hit product-related sales and large-scale game machine
contracts in the previous fiscal year. In addition, we can also look forward to benefits from video
distribution and game app market expansion including “Apple TV+” and “Apple Arcade”. Toyota Motor Corp (7203) 7,905 yen (8/11 closing price)
・Established in 1937. Conducts financial and other businesses even while focusing on the
automotive business. Besides providing cars such as sedans, minivans, 2BOX, SUVs, trucks, etc,
and related components and supplies, also offers automotive sales financing and housing,
pleasure boats, etc. Group companies include Hino Motors (7205) and Daihatsu Motor.
・For 1H (Apr-Sept) results of FY2020/3 announced on 7/11, net sales increased by 4.2% to
15,285.595 billion yen compared to the same period the previous year, operating income
increased by 11.3% to 1,404.336 billion yen, and net income increased by 2.6% to 1,274.976
billion yen. Vehicles sold increased by 220,000 units to 4.639 million units. Sales of new models
for RAV4 and Corolla were strong. Cost improvement initiatives had also contributed.
・For its full year plan, net sales is expected to decrease by 2.4% to 29,500.0 billion yen
compared to the previous year, and current income to increase by 14.2% to 2,150.0 billion yen.
Sales forecast is 8.95 million units, a reduction of 50,000 units from the original plan. The
decline in Asia due to the worsening markets in India and Indonesia will impact results, but
Japan and other countries with strong markets will see increase in sales.