+ Strong IB performance. IB grew 18.5% YoY as debt capital markets were strong in 3Q17 and were supported by advisory fees from One Belt and One Road projects.

– S$815mn net allowance taken in a move to accelerate recognition of residual weak O&G support service exposure. SP expense in the 3Q17 was S$1,665mn offset by a write back of S$850mn from GP to result in the net allowance of S$815mn expensed in the profit & loss line. This was in line with the recognition of S$1.7bn new O&G NPA this quarter. In 2Q17 the O&G NPA was c.S$1.4bn so with the additional S$1.7bn recognised, the total O&G NPA is now at c.S$3bn thus making up 57% of higher risk O&G exposure of S$5.3bn. The heavy SP expensed this quarter increased the total SP allowance to S$2.5bn from S$1.3bn in 2Q17. Of the total SP allowance, S$1.5bn is used to cover the O&G NPA of S$3bn.

– Less likely for a special dividend as excess GP is moved to SP through profit and loss line before FRS 109 implementation. The FRS 109 that will be implemented on 1 Jan 2018 will require banks to maintain their GP allowance of not less than 1% of its loans and receivables net of collaterals after deducting individual impairment provisions made. Any excess of that 1% will be transferred to either retained earnings or to a Non-distributable RLAR. The RLAR is a mechanism that cannot be released to profit and loss but is recognised as Tier 2 capital and serves to absorb unexpected deterioration of assets. The implication is GP cannot be utilised in the profit and loss line under the FRS 109 to help smoothen out any volatility in provision expense. Therefore by releasing S$850mn of GP to SP, DBS could reduce its GP ratio from 1.4% to 0.9% through the profit and loss line and provide as much as possible for the existing O&G exposure before the implementation of the FRS 109. We argue that this move would effectively take away the potential for the excess GP to be transferred to retained earnings for distribution as special dividends.

Owing to the aggressive recognition of NPA and net allowance expensed, we revise our FY17e net income growth to 3.1% in line with management guidance. Our previous FY17e net income growth estimate was 20.5%. Specific provisions could remain elevated in 4Q17 following the move to clean up as much O&G exposure as possible. Nonetheless, this would pave the way for FY18’s total credit cost to be lower than the through cycle level of 27bps. Underlying loan growth for this year and the next is 7% to 8%, higher than the mid-single-digit percentage guided at the beginning of this year. In all, we see the move to spring clean the O&G exposure as a preparation for a much stronger performance in FY18. 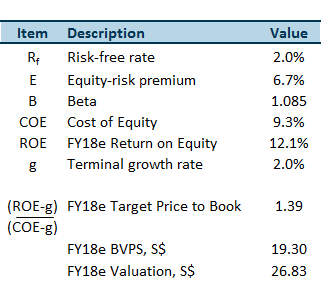